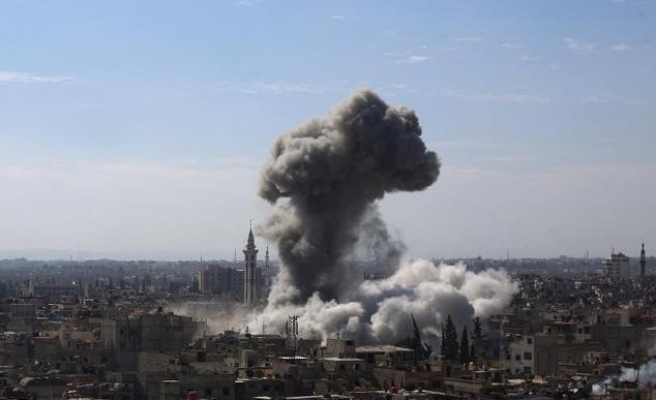 A major Syrian opposition group Wednesday postponed a decision on joining peace talks in Switzerland, as wrangling over who will go threatened to derail the biggest push yet to resolve the war.

The Saudi-backed High Negotiations Committee -- formed last month in an effort to unite Syria's fractious political and armed opposition -- met in Riyadh for a second day on whether to accept a UN invitation to the Geneva talks.

Salem al-Meslet, a Committee spokesman, said the group could not make a decision until it has received a response from UN Syria envoy Staffan de Mistura.

The Committee insists it must be the sole opposition delegation at the talks and wants "clarifications" after the United Nations issued invitations to other regime opponents.

"Whether we say 'yes' or 'no' depends on the reply of De Mistura," Meslet told AFP and Al-Arabiya television.

But he added there was a "positive" atmosphere at the Riyadh meeting.

The Geneva negotiations had already been delayed from Monday over the issue of who will represent the myriad forces opposing President Bashar al-Assad in Syria's nearly five-year civil war.

Instead of meeting face-to-face, Geneva delegations are expected to engage in indirect negotiations.

Officials have said the talks, only the second intra-Syrian dialogue since the start of the conflict, would run over six months, with the first round expected to last between two and three weeks.

Syria's regime has designated its UN envoy Bashar al-Jaafari as its chief negotiator.

Diplomats, including US Secretary of State John Kerry who met Committee members last weekend, have pressured the opposition to go to Geneva.

The United States, which sympathises with the rebels and sees the talks as the start of a transition process that would see Assad step down, urged them to take part in the talks.

"We believe that the HNC delegation and the various factions of the Syrian opposition have an historic opportunity to go to Geneva and propose serious practical ways to implement a ceasefire, humanitarian access and other confidence-building measures, and that they should do so without preconditions," State Department spokesman Mark Toner said.

The talks are part of a UN-backed plan, agreed by top diplomats last year in Vienna, that envisages negotiations followed by a transitional government, a new constitution, and elections within 18 months.

The roadmap is the most ambitious plan yet to end the conflict which has killed more than 260,000 people and forced millions from their homes.

De Mistura's office said on Tuesday it had issued invitations to the talks, but refused to say who had been invited.

The Committee, which earlier this month named Mohammed Alloush of the armed opposition group Army of Islam as its chief negotiator, confirmed it had received an invitation, but so did several other opposition figures not belonging to the body.

It was unclear whether the others had been invited as official delegates or as observers.

French Foreign Minister Laurent Fabius said Wednesday it was his understanding that only the Committee would be recognised as a negotiating delegation.

"(The Committee) is representative and it must be the negotiator, that is what was confirmed to me by Mr De Mistura, even if there can be other people" at the talks, Fabius told France Culture radio.

Committee coordinator Riad Hijab said a UN Security Council resolution calling for an end to sieges in Syria and the delivery of humanitarian aid "should not be ignored".

Many civilians are on the brink of starvation.

The row over who will attend reflects not only internal divisions but also the interests of diplomatic powers embroiled in the Syria conflict.

Russia, a main Assad ally, has pushed for a broader range of opposition at the talks, with Foreign Minister Sergei Lavrov saying Tuesday that negotiations "will not achieve results" if Syria's Kurds are unrepresented.

Syria's most powerful Kurdish organisation, the Democratic Union Party (PYD), said Tuesday it had not yet received an invitation.

Turkey, a leading backer of the opposition, considers the PYD to be an offshoot of the Kurdistan Worker's Party (PKK) that has waged an insurgency in southeastern Turkey.

There have been no suggestions that extremist movements, including the ISIL group, which has seized control of large parts of Syria and neighbouring Iraq, should be invited.