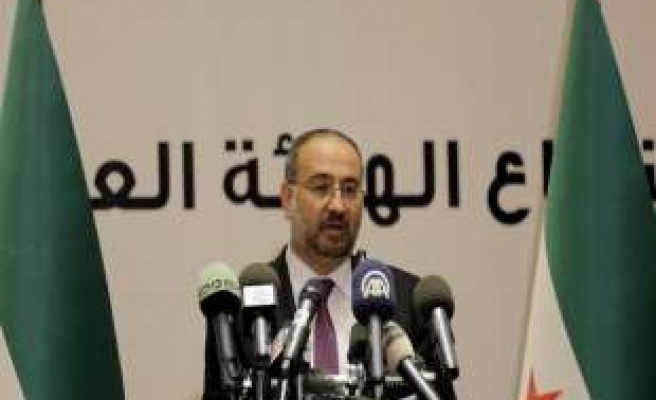 Ahmad Tomeh was elected on Saturday as the head of the interim goverment of Syria by the National Coalition of Syrian Revolutionary and Opposition Forces (SNC).

The Syrian coalition in a written statement expressed confidence in the new leader and wished him success in carrying out his duties to meet the aspirations of the Syrian people.

Tomeh was chosen as a nominee to lead the interim government, during the last visit of members of the Syrian National Council to Saudi Arabia to discuss the new alliances in and expansion of the Coalition.

A dentist originally from Deir al-Zor, who was detained after giving a speech at the funeral of Mohammad Murshed al-Khaznawi, son of the late Syrian Kurdish religious leader Sheikh Mohammad Ma'ashouq al-Khaznawi, Tomeh had gained acceptance also from the Muslim Brotherhood, but was also accepted by the Damascus Declaration group as former member.

Damascus Declaration was a statement of unity by Syrian opposition figures issued in October 2005, criticizing the Syrian regime as "authoritarian, totalitarian and cliquish," and called for "peaceful, gradual," reform "founded on accord, and based on dialogue and recognition of the other."

Tomeh said his priority would be restoring order to areas of Syria no longer controlled by Assad.

"The priority of my government will be to restore stability in the liberated areas, improve their living conditions and provide security," Tomeh told Reuters after his election at an SNC meeting in Istanbul.

Tomeh addressed coalition members as "comrades on the path to freedom," and indicated that the SNC would not compromise on a deal that could keep Assad in power.

"The Syrian people carried their lives and marched for freedom, not to improve the conditions of their serfdom," Tumeh said, adding that he would name his cabinet shortly.

In a closed door briefing, Tomeh told the coalition that the provisional government would operate from northern Syria, members present told Reuters.

The SNC appointed its first provisional prime minister in March, but that bid to create a government-in-exile fizzled out.

SNC member Khaled Khoja said the new provisional government had to prove itself quickly or the coalition as a whole would be undermined, to the benefit of the more hardline Islamists.

"News of (the U.S-Russian) agreement cast a shadow over the appointment of the prime minister," Khoja said.

"I think the government issue is not on their agenda. They are not keen to see this government on board. They (the Americans) wanted to agree on a government through Geneva, not before," Khoja said.

Tomeh, a former political prisoner from the eastern province of Deir al-Zor, got 75 votes out of 97 cast in a coalition ballot in Istanbul. He is expected to choose a cabinet of 13 ministers in a deal reached after two days of talks.