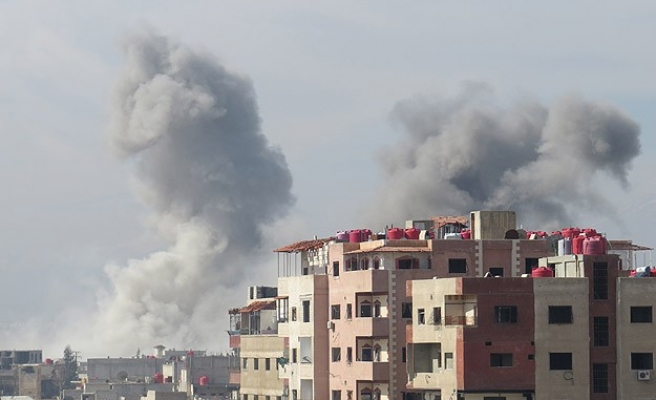 After almost a year’s siege by Syrian regime soldiers, Aleppo Central Prison - the 'last stronghold' of the Assad regime in the north of the country - was captured on Thursday by Syria’s opposition forces fighting to topple President Bashar al-Assad.

The capture of the largest prison in the region, which followed the opposition forces' control of Kindi Hospital - a place used by regime soldiers as a military base and to incarcerate political detainees - ended the Assad regime's existence in the north of Aleppo city.

In a joint operation on the strategically located prison-turned-army base, the Islamic Front and the Jabhat al-Nusra first exploded a bomb-laden vehicle in the area held by regime soldiers, then launched a large scale operation and seized full control of the prison.

Around 3,500 prisoners, including women and children, were released and taken to safe zones after the operation, but no reports have yet been received on whether there were any casualties.

Thanks to the capture of the prison, the region extending from the border with Turkey to the south of Aleppo has been completely freed of Syria regime control.

Among those freed from the prison were political detainees who had been held since the start of the protests against Assad's regime in 2011.

Last December, 350 of the detainees at the prison were released after 10 froze to death.

Assad regime soldiers were holding the prisoners before the capture of Aleppo prison by opposition forces.

Once the opposition forces seized control of the surroundings of the Aleppo Central Prison in early May, they attacked and captured the prison to free the inmates and take over the structure.

The Syrian regime forces began to take the prisoners inside as hostages, and the opposition forces had to stop the operations, to prevent the regime killing the prisoners.

At the first stage, opposition forces could not capture the prison, as the regime soldiers stonewalled it with tanks and heavy weapons.

The opposition forces laid siege on the prison upon which the regime forces turned the prisoners into hostages when they ran out of ammunition.

As a result of the siege, there was a food shortage among the prisoners and the Syrian soldiers in the prison, and the soldiers threatened to kill the prisoners unless the opposition sent in food.

The opposition forces let a limited amount of food into the prison provided by the Syrian Red Crescent, on the condition that no prisoners were killed.

The opposition forces said they had previously offered the regime soldiers safe exit from the prison under the supervision of neutral parties in return for releasing the prisoners and handing over the structure, but the Damascus regime turned down the proposal.

Assad regime planes and helicopters were reportedly dropping the ammunition needed by the Syria regime army soldiers into the prison by parachutes.

The Aleppo Central Prison is on a major highway that connects Aleppo’s opposition stronghold northern rural area to the city center.

Syrian regime barrel bombs kill 40
At least 40 people were killed on Thursday as Syria regime helicopters dropped more than 10 barrel bombs on opposition-controlled Masakin Hananu area in the northern province of Aleppo,  according to the Syrian Revolution General Commission (SRGC).

SRGC added that 20 others were wounded - some of them are in critical condition - in the attack, which demolished and damaged several homes, and people tried by limited means to pull out dead and injured bodies from underneath the debris.

Local Coordination Committees of Syria (LCC) said that a Syria army helicopter pounded the Daraya area of Damascus with barrel bombs, with reports of casualties and tens of houses destroyed.

The use of barrel bombs by the Syria regime has killed 4,000 people, 97 percent of whom were civilians, according to Monday's most up-to-date statistics in a report by the Syria Network for Human Rights (SNHR), a London-based human rights watchdog which tracks civilian and dissident casualties.

A barrel bomb is an improvised explosive device containing Trinitrotoluene (TNT), which is a non-precise and highly-explosive chemical, as well as pieces of sharp metal and concrete to enhance its destructive power. Each barrel weighs around half a ton and is deadly in an area of 250 square meters.

Sorry guys, but the Aleppo Prison assault was a failure. Al nusra and Ahrar al-Sham admitted to it on twitter.