Turkish Foreign Ministry Spokesperson Levent Gumrukcu addressed issues relating to Syria, Egypt and Iran. He noted that FM Davutoglu had urged the SNC’s Jarba to include Syrian Kurds in the SNC. 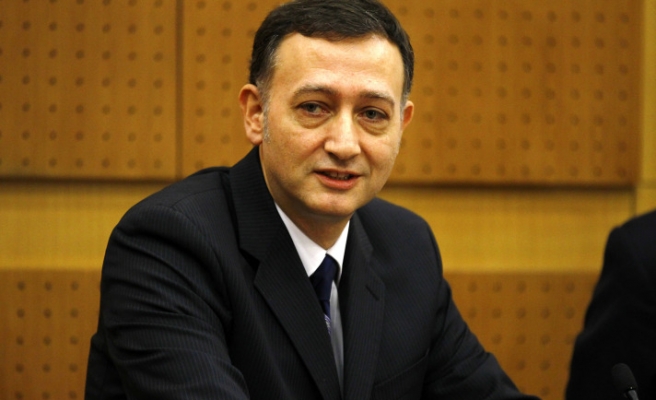 Turkish Foreign Ministry Spokesperson Levent Gumrukcu said on Tuesday that Turkey will contribute to, and support, the process of enabling Syrian Kurds to join the National Coalition for Syrian Revolutionary and Opposition Forces (SNC), adding that the coalition must embrace all segments of Syrian people and all opposition groups in order to continue the fight as a unified body.

Regarding a roadmap set by the Turkish FM for a solution in Egypt, Gumrukcu said "Turkey, first and foremost, urged for the release of Egypt's first democratically elected President Mohamed Morsi who was elected by a military coup as well as political detainees."

"We stressed a brand new and civilian roadmap via a process of dialogue embracing all political parties including the Muslim Brotherhood," he said.

Reminding Turkey's busy diplomacy traffic with the international actors in Egypt, he noted that "we strive for a joint attitude as we fortunately see that we agree with all the parties with which we discussed the issue."

As for the United States House of Representatives' approval of Iranian oil sanctions, Gumrukcu highlighted that the decree has not been finalized saying that, based on the United Nations (UN) Security Council's binding decisions of sanctions, Turkey's attitude was "obvious".

Concerning Iran's nuclear enrichment program, he noted "we want an immediate peaceful solution through political negotiations and dialogue between parties. All other compelling measures would further complicate the problem, leading to new instability areas."

Gumrukcu said Turkey favored that the Syrian opposition embraced all segments of the Syrian people as well as Syrian Kurds, stressing that Turkey "will provide all contribution and support to enable the process of Syrian Kurds joining the National Coalition for Syrian Revolutionary and Opposition Forces, the only legitimate representative of Syrian people."

Recalling a meeting between the Turkish FM and the new head of the SNC, Ahmad Al Jarba, Gumrukcu told the press conference that Davutoglu had urged Jarba to include Syrian Kurds in the SNC.

Gumrukcu also stated that a meeting between the top Turkish diplomat and the leader of the Syrian Kurdish group PYD last week was not a first and as mutually agreed, such talks would continue.

Touching upon Turkey's talks with the UN on preparations for a possible exodus of Syrian refugees, Gumrukcu remarked that "Turkey, Iraq, Jordan and Lebanon, as the four neighbors of Syria, put forward a UN meeting only on the humanitarian situation in Syria, which will possibly take place early in September in Geneva as the efforts continue."