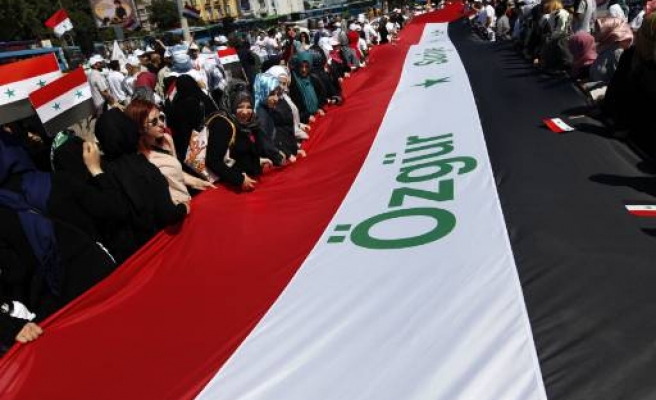 Security forces shot dead at least four demonstrators in southern Syria on Tuesday as crowds demanding the removal of President Bashar al-Assad left mosques after prayers marking the end of the Muslim fasting month of Ramadan, residents and activists said.

The four, including a 13-year-old boy, were killed when forces fired at demonstrators streaming out of mosques in the towns of al-Hara and Inkhil in southern Deraa province.

Demonstrations broke out elsewhere across the country, especially in Damascus suburbs, the city of Homs, 165 km (100 miles to the north) and the northwestern province of Idlib, even though numerous cities and towns have been besieged by tanks and troops for months, activists and residents said.

"The people want the downfall of the president," shouted protesters in the Damascus suburb of Harasta, where activists said dozens of soldiers defected on the weekend after refusing to shoot at protesters.

Five months into the street uprising against his autocratic rule, Assad, from Syria's minority Alawite sect, is facing more frequent demonstrations, encouraged by the demise of Muammar Gaddafi's rule in Libya, with whom Assad had close ties, and rising international pressure on the ruling hierarchy.

Residents and activists have also reported increasing defections among Syrian troops, drawn mostly from the Sunni majority population but dominated by Alawite officers effectively under the command of Assad's younger brother Maher.

The Syrian National Human Rights Organisation, headed by exiled dissident Ammar al-Qurabi, said pro-Assad forces, including a loyalist militia known as shabbiha, had killed at least 3,100 civilians since the uprising erupted in March, including 18 people on Monday alone.

Syrian authorities blame "armed terrorist groups" for the bloodshed and say they have killed 500 soldiers and police.

An armoured force surrounded a town near the city of Homs on Monday and fired heavy machineguns after the defection of tens of soldiers in the area, activists and residents said.

One woman, 45-year-old Amal Qoraman, was killed and five other people were injured, they said, adding that tens of people were arrested in house-to-house raids in the town of 40,000.

Syrian authorities have repeatedly denied that army defections have been taking place. They have expelled independent media since the uprising began in March.

European Union governments may impose sanctions on Syrian banks as well as energy and telecommunications companies within a week, along with a planned embargo on oil imports from the country, EU diplomats said on Monday.