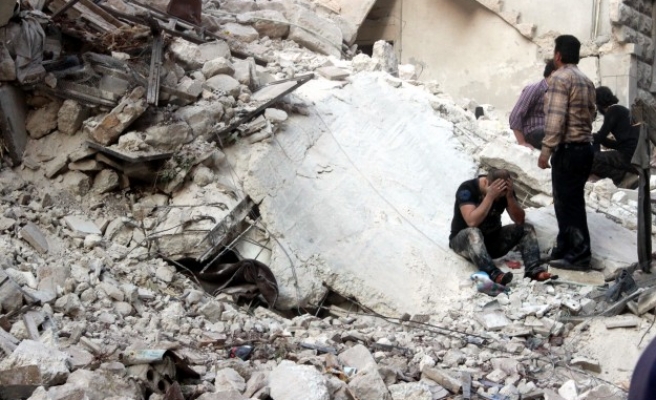 An explosion killed the leader of one of Syria's most powerful rebel groups Ahrar al-Sham on Tuesday, the group said, and an organisation that monitors violence in the civil war said at least 28 of its senior commanders had died.

Ahrar al-Sham is part of the Islamic Front alliance that has been in armed conflict with the ISIL which has seized swathes of territory in Syria and Iraq. It was at one point considered the strongest insurgent group in the Syrian civil war.

A statement posted on Ahrar al-Sham's official Twitter feed said the blast had hit a meeting in Idlib province in northwest Syria and confirmed Hassan Aboud, the group's leader, among at least 12 dead.

"We don't know the cause of the explosion yet," Abu Mustafa al-Absi, a member of Ahrar al-Sham's politburo told Al-Jazeera TV in an interview. "We do not rule out the infiltration of elements who were able to plant a bomb," he added.

The Syrian Observatory for Human Rights said some 50 of the group's leaders had been gathered at a house when the blast went off. Rami Abdulrahman, who runs the Observatory, said the blast had occurred inside the meeting.

Syria descended into civil war after an uprising against President Bashar al-Assad's rule in 2011. The United Nations recently put the death toll above 191,000 people.

In January another senior Ahrar al-Sham leader, Abu Khaled al-Soury, was killed in a suicide attack. Soury had fought alongside al Qaeda founder Osama bin Laden and was close to its current chief Ayman al-Zawahri.