In recent months, he has noticed that the rebels have been getting much more sophisticated Chinese, Croatian and other foreign equipment, notably the anti-tank and anti-aircraft weaponry they have long sought. 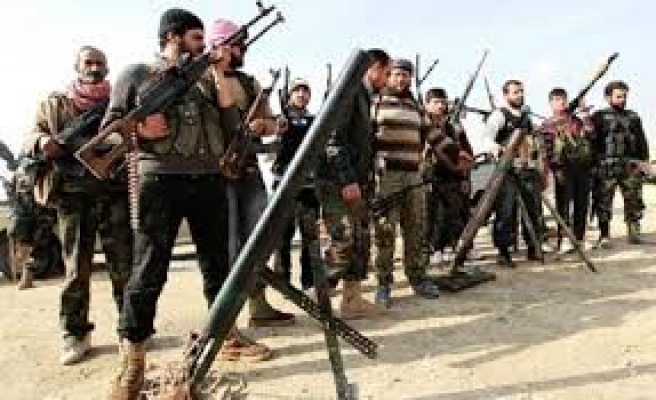 From his home in the English town of Leicester, former business administrator Elliot Higgins trawls through sometimes hundreds of online videos a day from Syria's civil war.

His research, begun after he took redundancy late last year, has made him a self-taught expert on the weaponry of a conflict largely inaccessible to outsiders.

"I was just interested, and no one else seemed to be doing it," the 34-year-old said in a telephone interview.

In recent months, he has noticed that the rebels have been getting much more sophisticated Chinese, Croatian and other foreign equipment, notably the anti-tank and anti-aircraft weaponry they have long sought.

More traditional experts, many of whom read Higgins' blog, have come to the same conclusion, although they say the supplies are not significant enough to change the dynamic of the rebel fight against President Bashar al-Assad's heavily armed forces.

"What we are seeing now are weapons that could not have been taken from government stockpiles or bought within the region," said Higgins, who blogs under the pseudonym "Brown Moses".

"They must be being flown in and shipped across the border from Jordan and Turkey."

Saudi Arabia and Qatar, most believe, are the major buyers.

The shakily filmed rebel videos posted on YouTube and elsewhere are almost invariably impossible to verify and contain few signs of hits on genuine targets, although fighting has devastated towns and cities, killed more than 100,000 people and forced millions to flee.

The most sophisticated anti-tank weapon obtained by the rebels so far, it is capable of punching through even modern "reactive armour" able to repel older and smaller missiles, although some rebels have complained they are not up to expectations.

The Chinese-made FN-6 MANPAD also appears to have helped the rebels raise their game, with one video apparently showing one bringing down a Russian-built helicopter gunship.

In the two weeks since the White House announced Assad's use of chemical weapons had prompted increased but ill-defined "military support" to the rebels, U.S. officials will not say if Washington itself has provided arms.

That it is looking to be more closely involved in the supply of weaponry from other states, however, is not disputed.

Speaking on condition of anonymity, one U.S. national security source did not question that Qatar might be providing MANPADs, but said it was a matter of concern to Washington.

Such weapons can also be used against civilian airliners, helicopters or military jets.

Where exactly the weapons are coming from is unclear. With Beijing still broadly opposed to foreign-backed regime change, few believe Qatar could have bought directly from China.

"They must be being bought from a third party - perhaps one that has not always kept the weapons in good condition," says blogger Higgins, pointing to one video where the missile appears to drop to the ground almost immediately after firing.

Judging by the videos, he said much of the Chinese-made weaponry appeared to be going direct to groups.

The Croatian-manufactured Soviet-style weaponry thought to be supplied by Saudi Arabia, in contrast, appeared to be going almost exclusively to the Western-backed Free Syrian Army.

They included RAK 12 multiple rocket launchers, RBG-6, M79 and M60 anti-tank weapons and the RPG-22, capable of going through more than a metre of reinforced concrete.

That matches the views of other analysts, although Qatari officials have said controls over arms shipments have been tightened.

"After all the criticism they have had, the Saudis are being very careful where they send weapons," said Bilal Saab, director and head of research at the Institute for near East and Gulf Military Analysis in Washington DC, adding that U.S. pressure was a factor.

"The Qataris care much less. They are arming whoever they want."

So far, however, analysts say there was little sign of them reaching the battlefield - although French weapons from the Libya conflict, particularly rocket launchers, were turning up.

Even before the war, Syria was awash with weaponry.

Using data from a variety of sources, University of Sydney based website www.gunpolicy.org estimates Assad's army and police had well over 2 million firearms between them, with an estimated 735,000 weapons - likely mainly AK-47s - in private hands.

Local smugglers have clearly been busy. According to a study by the Small Arms Survey released this week, the price of guns and ammunition increased by 60-80 percent in Lebanon between February and September last year, almost entirely on Syria demand.

Throughout the region, the growing demand for weaponry to go to Syria is an open secret and lucrative business opportunity.

For British blogger Higgins, tracking such trade is now more than just a hobby. With his website now receiving 2,000-4,000 hits a day, he has raised enough money to make it his main focus at least until the end of the year.

He has also begun to advise activists keen to track weapons' transfers in other current and former conflict zones.

"When you're here, you don't get a real feel for how important it is," he says. "Then you get out and meet people and see what it means to them."