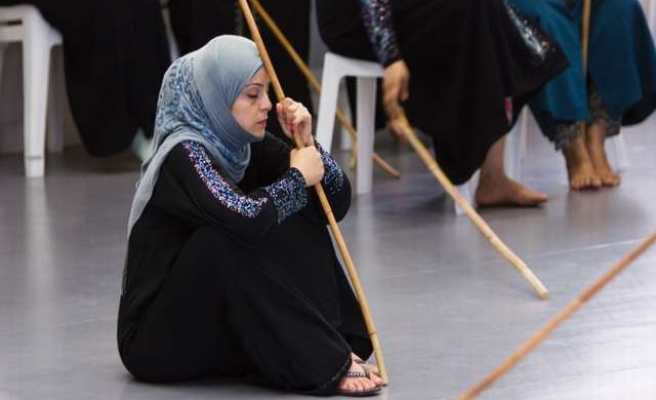 Syrian refugee women performed the Greek tragedy "Antigone" in the Lebanese capital of Beirut this week, weaving their own stories of loss and defiance into the ancient tale of a woman who disobeys her king to bury her rebel brother.

Sophocles' 2,500-year-old play was produced by Aperta Productions, a charity that aims to give refugees a safe place to express their trauma and try to feel mentally and physically stronger.

Some 1.1 million Syrians have fled to Lebanon in the three years since the start of a civil war in which 200,000 people have been killed and thousands imprisoned and tortured, rights groups say, for dissenting against President Bashar al-Assad, whose family has ruled the country for more than 40 years.

In the play Antigone, the main character defies her king and uncle Creon, by performing funeral rites for her slain brother, who is labelled a traitor. She faces the penalty of death and risks the stability of the state.

Like Antigone, many of the refugees who spoke her words have lost brothers.

During the play one told of her brother's disappearance and how she desperately - though futilely - tried to find him at a government prison, a base for the rebel Free Syrian Army and even al Qaeda's Syria wing, the Nusra Front.

"Antigone raises the cause of a woman facing ... a patriarchal authority and a male-dominant society," said Mohammed al-Attar, a Syrian playwright hired by Aperta to create the contemporary version of the play.

For the Syrian actors, who live in overcrowded refugee camps in Beirut, the play - a culmination of three months' workshops - was also an opportunity to tell their stories to a country that feels burdened by their presence.

Some Lebanese people complain that the refugees are taking their jobs, driving down wages and overloading schools and hospitals, and the Lebanese government has asked the international community for funds to help look after them on the grounds that it cannot cope with the influx.

One performer, Mona Fa, said she felt elated when the audience gave a standing ovation on the play's opening night.

"We wanted to deliver a certain image to the people so they see us and the Syrian refugees in another way from the image they usually look at," she said.