With the closing of one of the safety corridors on the border of Turkey and Syria, its feared that nearly 10,000 refugees are waiting to cross into Turkey as Un envoy De Mistura is pushing an initiative to create truces and improve aid access in defined local areas, starting in Aleppo, once Syria's main commercial hub 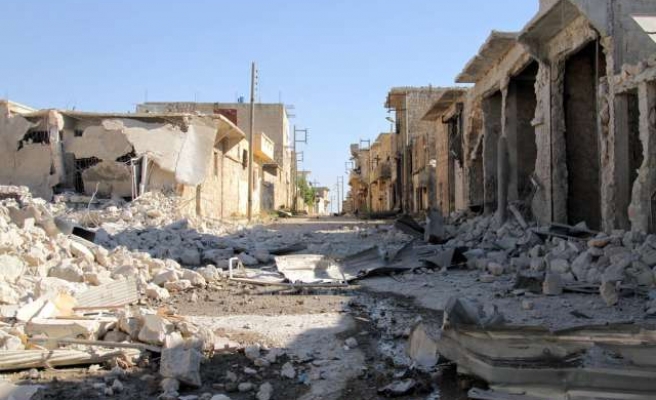 The Syrians have had no choice but to abandon their city. The refugees with little personal belongings and money have tried to escape to Turkey. Those with passports are entering through the Oncupinar border city of Kilis. The asylum seekers, with Istanbul being their priority are travelling to various cities. Those who have relatives in Kilis are migrating to be near them.

No passport means roads with mines.

Those who do not have passports are travelling on road with landmines. With the city under siege, nearly 1.5 million people are to be expected to migrate and nearly 10,000 Syrians are waiting at the border to migrate into Turkey. At the Esseleme border gate, a safety corridor 2km away from the Sucu town, there are nearly 10,000 Syrian dissidents waiting to cross into  Turkey

Stepping foot onto Turkish soil, a Syrian citizen by the name of Mustafa explained the traume that he had suffered: "Its like armageddon in Aleppo. There are barrel bombs exploding. At this moment ISID, El Nusra, FSA, Tawhid Brigade, are in the city fighting against each other. Turkey has look after us, we barely made it out alive."

The United Nations peace envoy to Syria said on Tuesday that Syrian officials had given him positive signals over a U.N. proposal for a local truce in the northern city of Aleppo, a main battleground in Syria's three-year-old war.

Speaking in a televised news conference in Damascus after meeting President Bashar al-Assad and the Syrian foreign minister, envoy Staffan de Mistura said the government's initial response to the proposal "was of interest and constructive interest".

Assad had also been quoted on Monday as saying the proposal was worth studying.

"I believe that the proposal of the U.N. regarding one freeze...for Aleppo, is a concrete and realistic one," Mistura said.

Control of Aleppo is divided between an array of rebel and pro-government forces. Neither side has managed to take a decisive advantage in more than two years of fighting.

In an interview with the British Broadcasting Corporation (BBC), de Mistura said a common threat posed by the ISIL militant group may help push government and rebel forces toward local truces.

De Mistura told the BBC that ISIL was "destabilising everybody".

Asked what incentive rebel and government fighters may have to accept local truces, de Mistura said: "There is one major new factor. What is that called? Daesh. ISIS. Terrorism."

ISIL is also known as ISIS and the Arabic acronym 'Daesh,' which its members consider derogatory.

The militants have seized swathes of territory in Iraq and Syria and are now the target of U.S.-led air strikes.

"Second...no one is actually winning (Syria's war)," de Mistura added. "You think that one side may be winning? The truth is no one is. And that's why we have an idea about how to push at least one major example, Aleppo."

De Mistura acknowledged that, even if the U.N. plan went forward, it would only be an initial step in a conflict which has killed some 200,000 people and displaced millions.

"Saying having a peace plan would be ambitious and delusionary. But I do have, we do have, an action plan. And the action plan starts from the ground: stop the fighting, reduce the violence," he said in the BBC interview.