Over 1.12 million refugees from Syria's civil war next door have registered in Lebanon, accounting for one-quarter of its population and exacerbating a severe water shortage 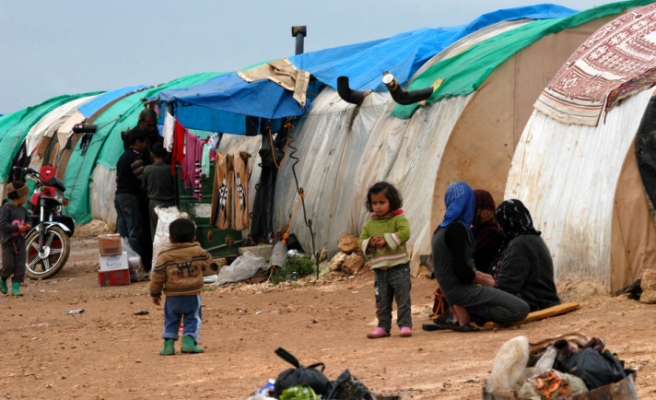 Lebanon is at risk of crumbling as a state under the burden of 1.1 million Syrian refugees and foreign donors must make good on pledges of support to help it survive the crisis, the top U.N. official in the small coastal country warned on Monday.

Political and religious leaders in Lebanon, both Sunni and Shi'ite Muslim, so far have kept a lid on growing tensions but donor nations have not honoured aid commitments, said Ross Mountain, the U.N. resident and humanitarian coordinator.

"This is no longer just a humanitarian emergency," said Mountain. "It is what the former president (Michel Suleiman) described as an existential crisis for Lebanon. It's about the security of the country, the stability of the country and I would suggest what happens in Lebanon will affect the region."

Over 1.12 million refugees from Syria's civil war next door have registered in Lebanon, accounting for one-quarter of its population and exacerbating a severe water shortage, Mountain said. The influx is expected to reach 1.5 million by year-end.

"We fear (tensions) will expand even further and not only result in Syrian-Lebanese interactions but also unfortunately raise the spectre of Lebanese-Lebanese inter-sectarian problems," Mountain told a news briefing in Geneva.

Syria's Sunni-Shi'ite sectarian divisions are largely mirrored in Lebanon, where civil war raged from 1975 to 1990.

Lebanese authorities have acknowledged the crisis, with the social affairs minister saying last week that the country faced political and economic collapse as the number of refugees threaten to exceed a third of the population.

"NOT AN EARLY WARNING"

The Middle East, reeling from crises in Syria, Iraq and now Gaza, does not need Lebanon to be mired in another civil war, he said. "If in our business it's important to talk about early warning, it's not early but I'm warning."

Yet donors have only contributed $500 million towards a $1.6 billion appeal for aid progammes in Lebanon this year, he said.

"It certainly hinges on money but doesn't only hinge on money. While there have been a number of security incidents linked to extremists, some bombings a couple of months ago and the rise of ISIS, the good news at the moment is that the Lebanese security forces have been effective in limiting that."

ISIS - Islamic State in Iraq and the Levant - is a militant force in control of wide tracts of eastern Syria and adjacent northern Iraq. It recently shortened its name to Islamic State and, seeking to rewrite the Middle East map, has declared a 'caliphate' in the region it holds.

Islamic State's success has emboldened like-minded militants in Lebanon who believe they can emulate it, Lebanon's interior minister said last week, confirming the group had now appeared in Beirut for the first time.

Mountain said another important factor was whether the Beirut government could maintain equilibrium between Lebanon's myriad political and sectarian actors and move toward presidential and parliamentary elections.

Hezbollah's involvement in Syria was "obviously highly contentious domestically and that's another dimension of the fragility of the political scene", he said, referring to the Shi'ite movement whose fighters have helped Syrian President Bashar al-Assad contain Sunni rebels.

Syrian refugees are scattered in 1,700 poor communities, mainly in the northern Lebanese provinces of Akkar and Bekaa, straining relations as some Lebanese have lost jobs to Syrians willing to be paid less, Mountain said.

"The tensions that we witness are (increasing) discontent about the situation, the jobs, access to basic services, and the resentment of that," he said.

"Young people of working, studying age being left to their own devices and building resentment, I don't think is very healthy not just for Lebanon but for the region."

The United Nations says tiny Lebanon has taken in 38 percent of all Syrian refugees in the Middle East, more than any other country. More than half of the Syrians in Lebanon are children, the vast majority not in school.