Syrian refugees top 3 million, half of all Syrians displaced - UN

The number of Syrian refugees left stranded by their country's ongoing civil war has surpassed 3 million, and 6.5 million are also displaced within Syria 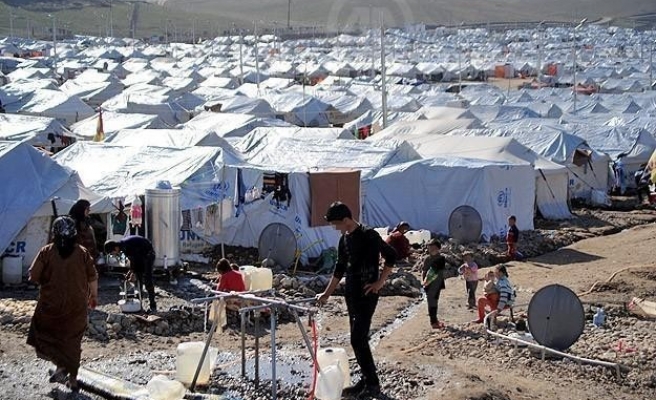 Three million Syrian refugees will have registered in neighbouring countries as of Friday, but many remain trapped by the advance of militants or are having difficulty in reaching open border crossings, the United Nations said.

Syrians desperate to leave their war-engulfed homeland are forced to pay hefty bribes at armed checkpoints proliferating along Syria's borders, or to smugglers, the U.N. refugee agency said.

The record figure is one million refugees more than a year ago, while a further 6.5 million are displaced within Syria, meaning that "almost half of all Syrians have now been forced to abandon their homes and flee for their lives," it said.

"The Syrian crisis has become the biggest humanitarian emergency of our era, yet the world is failing to meet the needs of refugees and the countries hosting them," Antonio Guterres, U.N. High Commissioner for Refugees, said in a statement.

Hollywood actress Angelina Jolie, who serves as UNHCR special envoy, said in a separate statement: "Three million refugees is not just another statistic. It is a searing indictment of our collective failure to end the war in Syria."

The vast majority of Syrian refugees remain in neighbouring countries, with the highest concentrations in Lebanon (1.17 million), Turkey (830,000) and Jordan (613,000), the UNHCR said.

Some 215,000 refugees are in Iraq with the rest in Egypt and other countries. Syrians have also been among migrants who have drowned in the Mediterranean trying to reach Europe, Jolie said.

In addition, the host governments estimate that hundreds of thousands more Syrians have sought sanctuary in their countries without formally registering, the agency said.

"More than four in five refugees are struggling to make a living in towns and cities outside of camps, with 38 per cent living in sub-standard shelter, according to a recent survey," the UN agency said.

The refugee agency noted that a deteriorating security situation and difficulty in finding work has pushed up food and commodity prices, citing an example of a village in Idlib where costs increased ten-fold in the last year.

"Up to 15% in Jordan, are suffering from long term medical conditions such as diabetes, heart disease and cancer," the refugee agency noted.

Donor have contributed more than 4 billion to the UN refugee agency since 2012 but it said that 2 billion more in 2014 alone, simply to meet the needs of refugees.

But there are worrying signs that the journey out of Syria is becoming tougher for desperate families, it said.

Some areas of Syria are emptying out as the front lines in the conflict shift. "Recent arrivals to Jordan, for example, are running from attacks in the areas of al-Raqqa and Aleppo," the UNHCR said, referring to northern areas of Syria controlled by ISIL forces.

"The borders are open in Lebanon. They're managed in Jordan and Turkey, that is in those countries feeling very legitimate security concerns, they are screening people who are coming in," UNHCR chief spokeswoman Melissa Fleming told a news briefing.

"In Iraq, the border is closed, it was closed some time ago in Anbar province and actually now it's no longer controlled by the government of Iraq," she said.

The border in Iraq's northern Kurdistan region has been closed also for some time except for Syrians returning to Syria, Fleming said.

"And in fact about 300 Syrians are actually returning to Syria every day. So this gives you a picture of the situation when you actually decide to return to Syria, or to flee to Syria as some Iraqis have, things must be pretty bad in Iraq."

Increasing numbers of Syrian families arrive in neighbouring countries in a shocking state, exhausted, scared and with their savings depleted, Fleming said.

"Many have been on the run for a year or more," she said.

"There have been cases of people who have been internally displaced inside the country moving from village to village, up to as many as 20 times, before they finally made it across an international border."