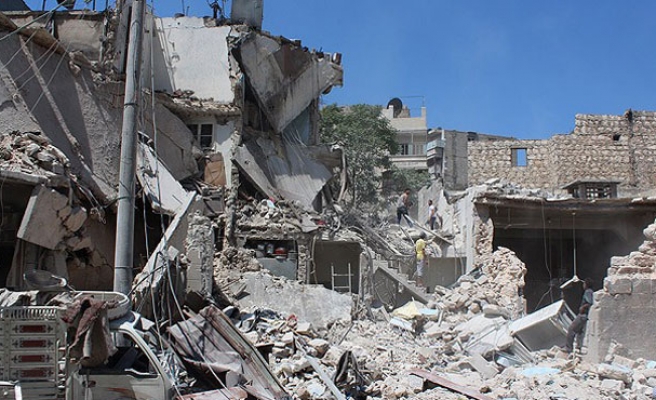 World Bulletin / News Desk
At least 65 people were killed Tuesday in a regime barrel bomb attack on a market in Al-Hasakah city in northeastern Syria, according to rebel sources.

A market for selling sheep in al-Khansaa village was attacked by Syrian regime air forces, the Syrian Revolution General Commission said in a statement.

“The barrel bomb attack turned the market into a lake of blood. The bodies of the victims could not be identified due to the severe bomb explosion. The victims included women and children,” the commission said.

A number of people were wounded in the massive bomb attack.

Another two people were killed in regime airstrikes in the northwestern province of Idlib on Tuesday, rebel police said.

The village of Hizareen was targeted by Syrian regime airstrikes. Two people were killed including a 15-year-old teenager and seven others wounded in the attack. A number of houses were destroyed.

“The targeted area was a residential area,” Abdul Hamid Abdul-Aziz, a police officer in the opposition's Free Syrian Police, said.

The Syrian Revolution General Commission represents a unified coalition of Syrian opposition groups that aim to establish a democratic government in Syria.

Since 2011, a brutal civil war has pit regime troops against opposition forces in Syria.