Although fighters have been prevented from taking central Damascus, President Bashar al-Assad's forces are worried they will reach it by digging tunnels from the sprawling suburbs and outlying towns under their control. 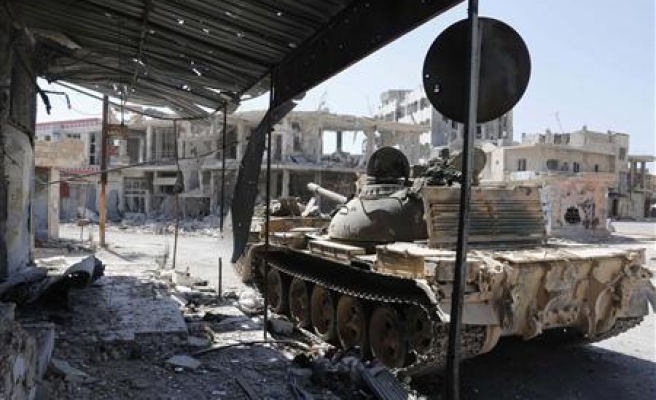 Syrian forces carried out their fiercest assault on the rebel stronghold of Jobar in Damascus since the start of the three-year war, conducting at least 27 air strikes on Tuesday and killing a child, according to activists and rights groups.

The government is trying to retake Jobar after the capture of several rebel-held areas around the centre of the capital this summer, including the town of Mleiha just outside Damascus on August 14.

Jobar was seized by armed rebels over a year ago, and the area has since endured ongoing ground shelling by government missile batteries located in Damascus city centre.

State-run television said the army had gained ground in Jobar, located on the eastern outskirts of Damascus, and aired footage of rubble and tunnels it said had been used by rebels. It also showed multiple explosions and smoke clouds coming from crumbling high-rise buildings.

Although fighters have been prevented from taking central Damascus, President Bashar al-Assad's forces are worried they will reach it by digging tunnels from the sprawling suburbs and outlying towns under their control.

The conflict in Syria started when Assad cracked down in 2011 on a pro-democracy uprising, which then armed itself.

Anti-Assad activists based in Jobar said the district has sustained fierce ground and aerial bombardment for several days, culminating in the worst day yet on Tuesday.

One activist in Jobar said he saw three siblings wounded by shrapnel, one of whom later died.

"Shrapnel hit the youngest and the eldest brothers, 8 and 14 years old, wounding their legs. The middle child, Adel Shaaban, who was 11, was hit in the head and killed," he told Reuters by Skype.

Residents in central Damascus, barely a 20 minute drive to Jobar, say they have been hearing warplanes buzz in the sky and unusually fierce ground shelling for several days.

"These sounds are nothing new to us anymore but the past few days have been particularly bad. My living room shakes each time they fire," said Nada, a resident of central Damascus who withheld her last name.

The Syrian Observatory for Human Rights, which collects information from all sides of the conflict and verifies victims by name, said there were several injuries reported due to the fighting in Jobar.