Assad and Saudi King Abdullah arrived in Lebanon for the first time in a joint mission to defuse a tense political situation. 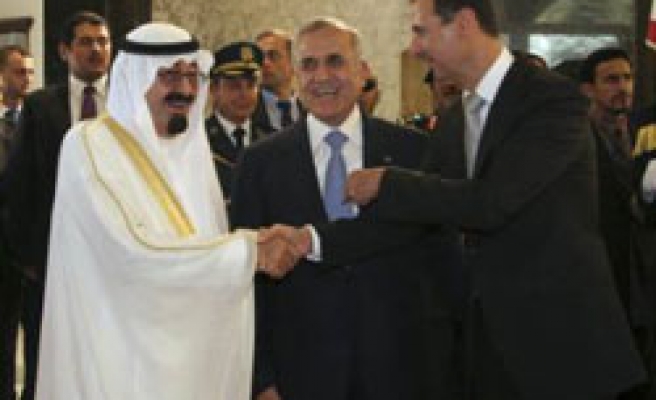 Syrian President Bashar al-Assad and Saudi King Abdullah arrived in Lebanon on Friday for the first time since the 2005 murder of ex-premier Rafiq Hariri in a joint mission to defuse a tense political situation.

The two leaders flew in together from Damascus and were greeted at Beirut airport by Lebanese President Michel Sleiman and Prime Minister Saad Hariri, son of the slain Sunni leader, as well as other dignitaries.

They were then headed to the presidential palace for a mini-summit hastily organised to address tensions over reports of an impending indictment against members of the Hezbollah for Rafiq Hariri's murder.

It is the first visit to the country by Assad since Hariri's assassination soured bilateral ties and forced the pullout of Syrian troops from Lebanon after a 29-year deployment.

Damascus has consistently denied accusations that it had a hand in the killing.

Saudi and Syrian flags were being flown throughout the Lebanese capital on Friday for the unprecedented joint visit, along with huge portraits of the king together with a welcome message.

Security was also tight, with additional army and police deployed.

The visit by the Saudi and Syrian leaders is scheduled to last only three hours and includes a lunch to be attended by some 250 officials, among them members of the unity government which includes two Hezbollah ministers.

Assad last visited Lebanon in 2002, and King Abdullah is the first Saudi monarch to visit the country since 1957.

Also coming to Beirut later on Friday is the emir of Qatar, Sheikh Hamad bin Khalifa al-Thani. The emir, who is staying until Sunday, is to meet separately with Lebanese leaders and due to visit the south of the country.

Hezbollah leader Hassan Nasrallah revealed that he knew the UN tribunal probing Hariri's murder was poised to indict members of his party.

He made it clear that he would not accept such a scenario, accusing the tribunal of being politicised and part of an Israeli plot.

Hariri told Al Arabiya television on Thursday that he believed the three-way summit between Abdullah, Assad and Suleiman would provide "considerable stability" to Lebanon.

Hezbollah's deputy chief Naim Kassem has said a change of government might become an issue if group members were indicted in "a project of strife, concocted by those who accuse us".

After their talks in Damascus, the two rulers "affirmed that they care about backing concord in Lebanon and support all that contributes to its stability and unity", a statement said.

Analysts say that in addition to threatening civil peace, an indictment of Hezbollah members would deal a blow to the party's reputation and destabilise Hariri's unity government.

King Abdullah was expected to urge the Syrian leader to use his influence with Nasrallah to reduce tension in Lebanon, which has enjoyed relative calm since a Qatari-mediated deal in 2008 ended a crisis.

Meanwhile, King Abdullah and Assad of Syria have praised Turkey's honorable stance on the Palestine issue.

The two leaders, who assessed the developments in the Arab world and particularly the situation in Palestine, pointed out to Turkey's support to Palestine, as well as its stance aiming at breaking the Israeli blockade on the Gaza Strip, Syria's official news agency SANA reported.

Praising Turkey's "honorable stance" on the issue, the leaders said that forces should be united in order to punish Israel for its attack against the aid flotilla carrying humanitarian aid to Gaza, the agency said.