Syrian tanks opened fire on poor Sunni districts in Latakia on Tuesday, residents said, the fourth day of a military assault on the northern port city. 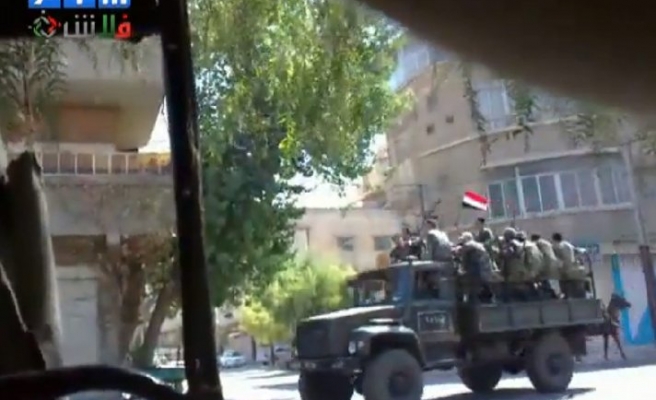 Syrian tanks opened fire on poor Sunni districts in Latakia on Tuesday, residents said, the fourth day of a military assault on the northern port city aimed at crushing protests demanding an end to 41 years of Assad family rule.

President Bashar al-Assad, from Syria's minority Alawites, has broadened and intensified a military assault against towns and cities where demonstrators have been demanding his removal since the middle of March.

"Heavy machinegun fire and explosions were hitting al-Raml al-Filistini (home to Palestinian refugees) and al-Shaab this morning. This subsided and now there is the sound of intermittent tank fire," one of the residents, who lives near the two districts of Latakia, told Reuters by telephone.

The Syrian Revolution Coordinating Union, a grassroots activists' group, said six people, including Ahmad Soufi, 22, were killed in Latakia on Monday, bringing the civilian death toll there to 34, including a two-year-old girl.

The crackdown coincided with the Aug. 1 start of the Muslim Ramadan fast, when nightly prayers became the occasion for more protests against over four decades of Baathist party rule.

Syrian forces have already stormed Hama, scene of a 1982 massacre by the military, the eastern city of Deir al-Zor, the southern city of Deraa and several northwestern towns in a province bordering Turkey.

"The regime seems intent on breaking the bones of the uprising across the country this week, but the people are not backing down. Demonstrations in Deir al-Zor are regaining momentum," one activist in the city said.

The Assads have been repeatedly warned by the United States, European Union and Turkey but the government is signalling to its legion of critics abroad that it will not bow to calls for change that have swept across the Arab world, and to its people that it is prepared to wade through blood to stay in power.

"This is our final word to the Syrian authorities, our first expectation is that these operations stop immediately and unconditionally," Davutoglu said in Turkey's strongest warning yet to its once close ally and neighbour.

Turkish leaders, who have urged Assad to end violence and pursue reforms in Syria, which has a 75 percent Sunni majority, have grown frustrated. Davutoglu held talks with the Syrian leader in Damascus only last week.

Bashar, who inherited power in 2000 from his father, clearly believes overwhelming force will extinguish calls for the dismantling of the police state and the Assad clan's power monopoly, free elections and an end to corruption.

For Assad to enact the reforms he has been promising since he came to power in 2000, he would have to purge the Syrian establishment of his most powerful allies and cronies, and end the control of the security apparatus over the state. Since they are the foundation of his power, that is unlikely.

Yasser Saad, a dissident Syrian political commentator, said Turkey was concerned about the fate of Sunni co-religionists in Latakia, "with sectarian build-up escalating in the region, from Iran to Iraq to Lebanon and the Gulf."

"The popular Syrian movement still regards the Alawite community as an important part of the national mosaic. The notables of the community have to declare a clear stand regarding the crimes of the regime and not allow the sect to be used as human shields that falls with the fall of the regime."

In Tartous, a small city with a large Alawite population and a Russian naval base south of Latakia, thousands marched on Monday to "affirm national unity and support for the comprehensive reform programme being led by President Bashar al-Assad," the official news agency said, in the latest pro-Assad rally organised by the authorities.

The Syrian Revolution Coordinating Union said troops also assaulted villages in the Houla Plain north of the city of Homs on Monday, killing eight people as they raided houses and made arrests. The organisation said four people were killed in Homs during similar attacks.

In a now-familiar pattern, tanks and armoured vehicles deployed around dissident neighbourhoods of Latakia and essential services were cut before security forces began raids, arrests and bombardment, residents said.

Thousands of people fled a Palestinian refugee camp in Latakia, some fleeing gunfire and others leaving on orders from the Syrian authorities, a U.N. official said.

"Between 5,000 and 10,000 have fled, we don't know where these people are so it's very worrying," said Christopher Gunness, spokesman for the UNRWA agency which cares for Palestinian refugees. "We have a handful of confirmed deaths and nearly 20 injured."

Another grassroots activist group, the Local Coordination Committees, said it had the names of at least 260 civilians, including 14 women and two infants, killed this month.

It said the actual toll was likely to be far higher with scant information so far from the hard-hit city of Hama, still besieged by troops and secret police. In 1982, some 20,000 people were killed with entire neighbourhoods razed as Assad's father put down an Islamist revolt.

Syria has expelled most independent media since the unrest began, making it hard to verify reports from the country.

Nightly anti-Assad rallies after Ramadan prayers have drawn around 20,000 people in different areas of the city, said one witness, a university student.

The official state news agency SANA denied Latakia had been shelled from the sea and said two police and four unidentified armed men were killed when security forces pursued "armed men who were terrorising residents ... and using machineguns and explosives from rooftops and from behind barricades".

Unlike most Syrian cities, which are mainly Sunni, Latakia has a large Alawite population, partly because Assad and his father before him encouraged Alawites to move from their nearby mountain region by offering them cheap land and jobs in the public sector and security apparatus.

Latakia port has played a key role in the Assad family's domination of the economy, with Bashar al-Assad's late uncle Jamil having been in virtual control of the facility, and a new generation of family members and their friends taking over.

Rights groups say at least 12,000 have been detained during the uprising. Thousands of political prisoners were already in jail. Amnesty International says it has listed 1,700 civilians killed since mid-March. Washington has put the toll at 2,000. Damascus says 500 police and soldiers have been killed.