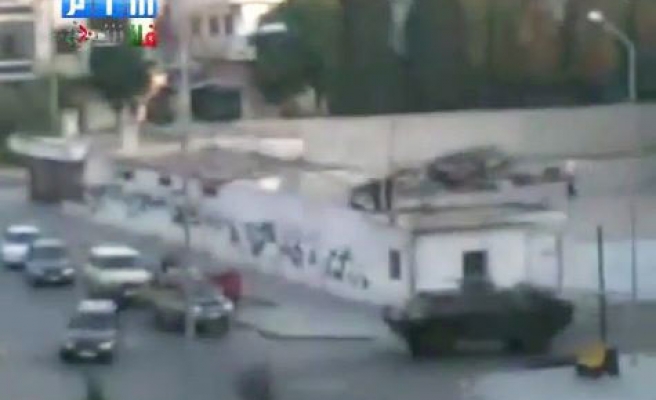 Syrian forces fired heavy machineguns at a residential district in the central city of Homs on Saturday after protests against President Bashar al-Assad, who faces growing world isolation for his repression of five months of popular unrest.

Residents said military helicopters also flew over the restive city in the early hours, where electricity and landline telephones were cut on Friday following demonstrations in which crowds had waved shoes in a sign of contempt for Assad.

"We want revenge against Maher and Bashar," others shouted, referring to the Syrian leader and his powerful brother -- a military commander accused by diplomats and residents of attacking cities and cracking down on pro-democracy protests.

Assad's forces killed 34 people, including four children, across Syria on Friday in Homs and the southern province of Deraa, where the popular revolt began in March, as well as in suburbs of Damascus and the ancient desert town of Palmyra, activists said.

International pressure on Assad ratcheted up this week after the United States and European allies called on the 45-year-old leader to quit, and imposed new sanctions.

Britain said it had not yet decided whether to back proposed European Union sanctions on Syrian oil, and is wary of measures that could hurt the Syrian people more than they hurt Assad.

The United States imposed an oil embargo on Syria on Thursday in protest against Assad's crackdown on civil unrest that the United Nations says has killed around 2,000 people.

But the EU agreed on Friday only to expand the number of Syrian officials and institutions targeted, deferring discussion of an oil embargo until next week.

"We have not taken a decision on oil," British Foreign Office Minister Alistair Burt said in a BBC interview. "Our view is that sanctions must continue to be targeted on those who support the regime, and sanctions should be considered on the basis of what will have most effect on changing that situation or improving the situation of the Syrian people."

Some EU governments are concerned about harming their commercial interests and long-term relations with Syria, where Anglo-Dutch Royal Dutch Shell and France's Total are among significant investors.

Europe is a major consumer of Syrian oil exports, a big source of revenue for Assad's government. However, some analysts say sanctions might drive Assad closer to Iran, while having little impact on the level of violence in Syria.

Encouraged by growing global pressure on Assad, the Syrian opposition in exile said it would set up a National Council in Turkey on Sunday to support the uprising and help fill any power vacuum should the protests oust the Syrian leader.

Similar initiatives in the past have failed to produce a robust umbrella group to unite the opposition, fragmented by 41 years of harsh rule by Assad and his father, Hafez al-Assad.

Assad, from the minority Alawite sect in the mostly Sunni Muslim nation, told U.N. Secretary-General Ban Ki-moon this week that military and police operations had stopped. But activists say his forces are still shooting at protesters.

Syria has expelled most independent media since the unrest began, making it difficult to verify events on the ground.

U.N. investigators say Assad's forces have committed violations that may amount to crimes against humanity. A U.N. humanitarian team was due in Syria on Saturday to assess needs.

Despite the sharpening of Western rhetoric on Syria, there is no chance of Western military action like that against Libya's Muammar Gaddafi, meaning Assad's conflict with his opponents seems likely to grind on in the streets.