Rights campaigners said Assad forces also assaulted villages in the Houla Plain north of the city of Homs on Monday, carrying out house-to-house raids and arrests. 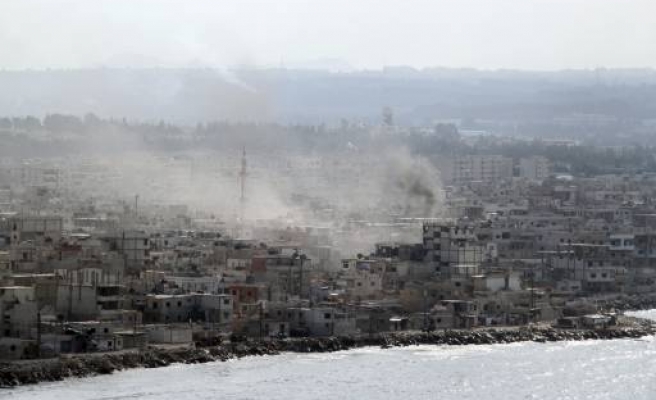 Syrian forces shelled residential districts in Latakia on Monday, residents said, the third day of an assault on neighbourhoods of the port city which had seen mounting protests against President Bashar al-Assad's autocratic rule.

Assad has broadened a military assault to try to crush a five-month street uprising demanding his removal since the start of the Muslim fasting month of Ramadan on Aug. 1, when daily protests against 41 years of the Assad family rule began to increase.

Latakia is the latest city to be stormed after Hama, scene of a 1982 massacre by the military, the eastern city of Deir al-Zor, capital of a tribal province bordering Iraq's Sunni heartland, and several towns in the northwestern Idlib province, which borders Turkey.

"Shelling has renewed on al-Raml al-Filistini and al-Shaab districts. There is heavy machinegun firing on Sulaibeh, al-Ashrafieh, al-Quneines and al-Ouneineh and the citadel neighbourhoods," one resident, a business owner who did not want to be further identified, said by telephone.

"People are trying to flee but they cannot leave Latakia because it is besieged. The best they can do is to move from one area to another within the city," another witness told Reuters.

The Syrian Revolution Coordinating Union, a grassroots activists' group, said a 22-year-old man, Ahmad Soufi, was killed by Assad's forces on Monday, bringing the total killed in suthe three-day sea and land assault on Latakia to at least 29 civilians, including a two-year-old girl.

Tanks and navy ships shelled southern parts of Latakia on Sunday, residents and rights groups said. Around 20,000 people have been rallying daily to demand Assad's removal in different areas of the city after Ramadan evening prayers, said one witness, a university student.

The official state news agency denied that Latakia was shelled from the sea and said two police and four unidentified armed men were killed when "order preservation forces pursued armed men who were terrorising residents ... and using machineguns and explosives from rooftops and from behind barricades."

Unlike most other Syrian cities, which are predominantly Sunni, Latakia has a large Alawite population because of its proximity to the Alawite Mountains and because Assad and his father have encouraged Alawites to move from their traditional mountain region, offering them cheap land and jobs in the public sector and security apparatus.

Latakia port figures highly in the Assad family domination of the economy, with Bashar al-Assad's late uncle Jamil having been in virtual control of the facility, and a new generation of family members and their friends taking over.

Rights campaigners said Assad forces also assaulted villages in the Houla Plain north of the city of Homs on Monday, carrying out house-to-house raids and arrests, adding to at least 12,000 who have been detained since the uprising and thousands of people already held as political prisoners before then.

Assad replaced the governor of the northern province of Aleppo on Monday, the Syrian official news agency said, following the break out of pro-democracy protests in Aleppo city, Syria's main commercial hub and capital of the province,

"The minority regime is playing with fire. We are coming to a point where the people in the street will rather take any weapon they can put their hand on and fight than be shot at, or arrested and humiliated," one activist said.

"We are seeing civil war in Syria, but it is one-sided. The hope is for street protests and international pressure to bring down the regime before it kills more Syrians and drives them to take up arms," he added.

The assaults by Syrian security forces are being met with increasing international condemnation.

United Nations deputy political affairs chief Oscar Fernandez-Taranco was quoted by diplomats in New York on Wednesday as saying Assad forces had killed nearly 2,000 Syrian civilians since March, 188 since July 31 and 87 on August 8 alone. Syrian authorities blame "terrorist groups" for the violence and say 500 police and army have been killed.

The 57-member Organisation of Islamic Cooperation called on Saturday for an immediate halt to the military campaign against protesters. U.S. President Barack Obama and Saudi Arabia's King Abdullah repeated their calls for the military assaults to stop.

Obama spoke to British Prime Minister David Cameron and the leaders called for an immediate end to attacks by Assad's forces, the White House said.

It said Obama and Cameron would "consult on further steps in the days ahead". Washington wants Europe and China to consider sanctions on Syria's oil industry, a key source of hard currency for the government.

Assad comes from Qerdaha, a village in the Alawite Mountains 28 km (17 miles) southeast of Latakia, where his father, the late President Hafez al-Assad, is buried.

Demonstrations against Assad during the five-month uprising have been biggest in Sunni neighbourhoods of Latakia, including Sulaibeh in the centre of the city and al-Raml al-Filistini and al-Shaab on the southern shore.

Troops have been besieging the neighbourhoods for months, residents say, with garbage going uncollected and electricity often cut.

Syrian authorities have expelled most independent media since the beginning of the uprising, making verifying reports from inside the country difficult.