In Hama, residents said at least 45 people were killed as tanks occupied the city where Assad's father, the late Hafez al-Assad, sent in tanks. 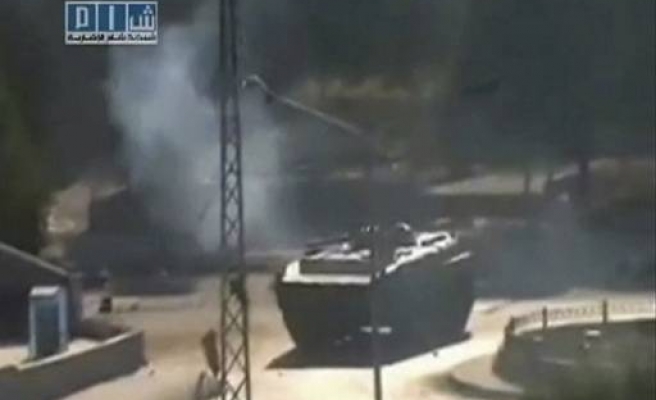 In Hama, residents said at least 45 people were killed as tanks occupied the city where Assad's father, the late Hafez al-Assad, sent in tanks and killed thousands to crush a rebellion in 1982.

"The sound of tank shelling and their heavy machineguns echoed in Hama all day. We fear many more martyrs. Most people in my neighborhood have fled," said one resident in Sabounia district, a small business owner who did not want to be named.

"The shabbiha (militiamen loyal to Assad) are cleaning the streets near the university campus to stage a pro-Assad march tomorrow as if nothing is happening in Hama," he told Reuters by satellite phone.

Electricity and communications have been cut off and as many as 130 people have been killed in a five-day military assault since Assad, from Syria's minority Alawite sect, sent troops into the city on Sunday, residents and activists said.

U.S. Secretary of State Hillary Clinton said Washington believed Assad's forces were responsible for the deaths of more than 2,000 Syrians in their attacks on peaceful protesters during the five-month uprising.

Clinton repeated that the United States believed Assad had lost legitimacy in Syria and said Washington and its allies were working on strategies to apply more pressure beyond new sanctions announced earlier on Thursday.

"We are working around the clock to try to gather up as much international support for strong actions against the Syrian regime as possible. I come from the school that actions speak louder than words," Clinton told reporters.

Residents of Deir al-Zor and activists said hundreds of tanks and armored personnel carriers have assembled in the last few days outside the eastern city on the Euphrates River, especially at a juncture of a highway leading to Damascus.

Tension rose in the eastern provincial capital this week after secret police in Damascus abducted Sheikh Nawaf al-Khatib, head of the main Baqqara tribe and an outspoken critic of assaults on pro-democracy protesters in the province.

Last week, tanks moved into Deir al-Zor and the town of Albu Kamal, on the border with Iraq. Both towns have seen large pro-democracy protests.

Abdullah Abazeid, a member for the Syrian Revolution Coordinating Committees, said three protesters were killed and at least 10 wounded in the town of Nawa near Deraa, cradle of the uprising against 41 years of Assad family rule.

"Demonstrations have been breaking out daily after 'tarawih' (prayers following the nightly breaking of fasting during the Islamic month of Ramadan) in Deraa and the surrounding towns," Abazeid told Reuters.

The Local Coordination Committees, another activists' organization, said another protester was killed in the Damascus suburb of Qadam when four buses full of security police surrounded a demonstration there and fired at the crowd.

On Wednesday Assad's forces killed at least seven demonstrators after tarawih prayers across the country, witnesses and rights campaigners said.

In a sign that the assault on Hama and other Syrian cities may be galvanizing the international community against Assad, Russian President Dmitry Medvedev, whose country had resisted United Nations condemnation of Syria, said Assad risked a sad fate if he failed to reconcile with his opponents.

His comments came a day after Russia, which has a naval base in Syria, backed a U.N. Security Council statement condemning "the widespread violations of human rights and the use of force against civilians by the Syrian authorities."

The United States extended sanctions against Syria on Thursday to include Mohammad Hamsho, a prominent Syrian businessman and member of parliament.

It said he was a front for the interests of Assad and his brother Maher, who directly commands ultra-loyalist forces from the minority Alawite sect, the same sect as Assad, spearheading military assaults.

The move by the U.S. Treasury fell short of calls by Syrian dissidents and some U.S. senators to target Syria's oil and gas sector to put some muscle behind the sanctions, which have had little impact on Assad's tactics.

The European Union also agreed to further extend sanctions on Syria. Germany said it would ask the United Nations to send a special envoy to Syria to increase pressure on Assad and Austrian Foreign Minister Michael Spindelegger said Syria was increasingly isolated.

"Given the regime's cold-blooded violence against its own people, the front of countries holding their protective hand over the Syrian leadership is starting to crumble," he said.

In Hama, residents said tanks had advanced into the main Orontes Square, the site of some of the biggest protests against Assad, who succeeded his father in 2000. Snipers spread onto rooftops and into a nearby citadel.

Syrian authorities say the army has gone into Hama to confront armed groups trying to take control of the city. They say at least eight soldiers have been killed by gunmen.

The contrasting accounts from activists and state media are difficult to verify because Syria has barred most independent media since the beginning of the protests.

Alongside the military crackdown, Assad has lifted a state of emergency in place for nearly 50 years and promised constitutional changes to open Syria up to multi-party politics, but human rights campaigners and Assad's opponents say the moves were largely on paper and did not alter the Syrian police state.

On Thursday he formally approved laws passed by the cabinet last week allowing the formation of political parties other than his ruling Baath Party and regulating elections to parliament, which has so far been a rubber-stamp assembly.

A new report by the Syrian National Human Rights Organization, headed by dissident Amman Qarabi, said a campaign of arbitrary arrests and abductions by secret police across Syria has intensified in the last few days, with over 12,000 people in jail since the uprising.