At least 1,000 deserters and armed villagers have been fighting tank- and helicopter-backed forces trying to regain control of Rastan, a town of 40,000, in central Syria. 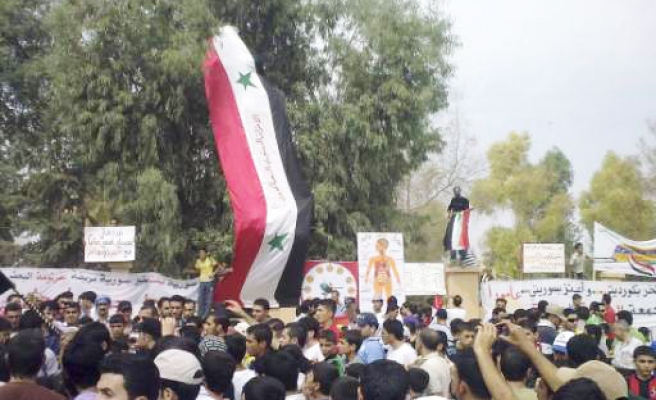 Tanks pounded a Syrian town that has become a refuge for army deserters for a second day on Wednesday, residents said, in the first major battle with defecting soldiers since a six-month-old revolt against President Bashar al-Assad began.

At least 1,000 deserters and armed villagers have been fighting tank- and helicopter-backed forces trying to regain control of Rastan, a town of 40,000, in central Syria.

"They have got a foothold in the southern part of Rastan, but the Free Syrian Army is fighting back and has destroyed three armoured vehicles," said one resident by satellite phone.

"Buildings have caught fire in several neighborhoods from tank fire," he said from the town, which lies about 180 km (112 miles) north of Damascus, among farmland and wheat fields on the Orontes River and on the northern highway leading to Aleppo.

Syrian authorities have not commented on the assault, but in the past they have denied any army defections, blaming "foreign meddling" for the turmoil in the country of 20 million.

It was impossible to verify which side has the military upper hand in Rastan -- Syria has barred most international media from the country -- but one Western diplomat said it was "highly possible" that defectors were holding their ground.

After months of mostly peaceful anti-Assad protests, army deserters unwilling to shoot at demonstrators have formed themselves into rebel units, of uncertain size, mostly in Syria's agricultural heartland around the city of Homs.

The area is a recruiting ground for Sunni conscripts who provide most of manpower in the military, which is dominated by officers from Assad's minority Alawite sect, and in better equipped core units commanded by his younger brother Maher.

Homs and its environs have seen some of the biggest street protests against Assad, as well as some of the heaviest assaults in a crackdown that has killed 2,700 people, by a U.N. count.

"The (army) defections are occurring in the regions where the killings are most severe. For every Syrian the regime kills, it is creating 10 opponents," one activist said.

"The problem is that the defectors have nowhere to go. There is no safe haven or outside backing for them," he said.

The bulk of the armed forces has remained nominally loyal, with tight surveillance by Alawite secret police. Soldiers who disobey orders to crush protests risk being shot.

Peter Harling, regional project director at the International Crisis Group, said army desertions were not a countrywide trend. Elsewhere, he said: "People have been preparing themselves (to take up arms) but continue showing restraint."

"There has been a lot of talk from the opposition about militarisation, but this is for now an expression of frustration more than a definite shift in strategy," Harling told Reuters,

Citing residents, the Syrian Revolution General Commission, which groups several activist organisations, said Rastan neighborhoods had been under fire since early morning from anti-aircraft guns, tanks and armoured personnel carriers. "Two mosques were hit. Homes and clinics have been damaged," it said.

With communications cut in the area, there were no firm reports on casualties. One local activist said on Tuesday that five civilians and rebel soldiers had been killed.

In another outbreak of armed opposition to Assad, people in the nearby city of Homs said rebel soldiers had hit a government tank with a rocket-propelled grenade on Tuesday. The attack occurred in the Bayada district, home to desert tribesmen who are among Assad's fiercest foes in the city of one million.

Several doctors and professor have been assassinated in Homs in the past few weeks by what the authorities call "terrorists".

The Local Coordination Committees and other activist groups, said the authorities were behind the killings to stoke sectarian strife in the city, which has a significant Alawite minority.

Syrian authorities say "armed terrorist groups" are responsible for civilian deaths in the past six months of unrest and have also killed 700 members of the security forces.

Turkey is preparing sanctions against Syria, a former ally, in a policy shift that aligns Ankara more closely with the West and complements a Turkish arms embargo already in place.

Ankara has said the sanctions, expected to be unveiled within days after Prime Minister Tayyip Erdogan visits border camps sheltering more than 7,000 Syrians who have fled the violence, will target Assad's government, not the Syrian people.

Officials say the measures will affect military, banking and energy ties between the formerly friendly countries.

"Turkey is reverting to the U.S. and European line on Syria," said foreign policy expert Semih Idiz. "The relationship with Syria has collapsed and it is heading for a freeze."

Britain, France, Germany and Portugal plan to circulate a draft U.N. resolution that condemns Syria, but drops calls for immediate sanctions against it, diplomats said on Tuesday.

The scaled-back resolution, aimed at breaking a deadlock on the Security Council, will threaten future sanctions if Assad's government does not halt military attacks on civilians.