Syrian troops backed by tanks raided houses looking for activists in two main districts of the city of Hama on Wednesday, residents said. 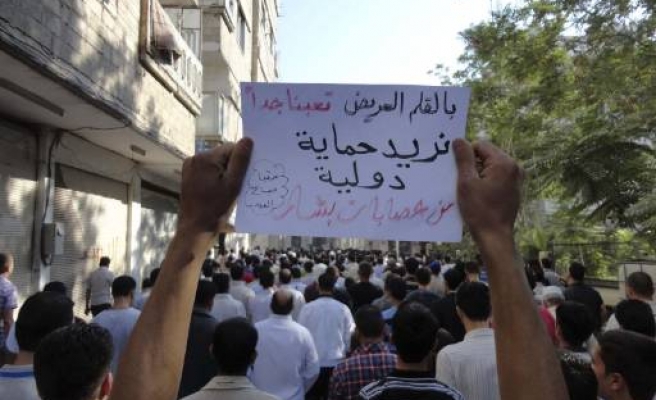 Syrian troops backed by tanks raided houses looking for activists in two main districts of the city of Hama on Wednesday, residents said.

Syrian authorities said the army had withdrawn from Hama this month after a 10-day assault to crush pro-democracy protests against the rule of President Bashar al-Assad, who has sent the military to numerous towns and cities across the country to crush the five-months of street protests.

"Several light tanks and tens of small and big buses parked at Al-Hadid bridge at the eastern entrance of Hama. Hundreds of troops then went on foot into al-Qusour and Hamdiya neighbourhoods. The sound of gunfire is being heard," Abdelrahman, a local activist, told Reuters by phone.

"These neighbourhoods have been among the most active in staging protests," he added.

Another resident said Toyota pick-up trucks mounted with machineguns and buses full of troops also assembled overnight near al-Dahiriya district at the northern entrance of Hama, 205 km (130 miles) north of the capital Damascus.

Hama, on an ancient agricultural plain on the Orontes River, was scene of a 1982 massacre by the military. The city saw some of the largest protests in the current uprising.

Tanks and troops entered the city of 700,000 on the eve of the Muslim fasting month of Ramadan on July 31 and according to an activist group killed 130 civilians in the first day of the attack alone.

Troops withdrew after 10 days though and residents reported a resumption of protests, encouraged, like elsewhere in Syria, by the overthrow of Muammar Gaddafi in Libya, with whom Assad had close ties, and increased international pressure on the government.

Assad, from Syria's minority Alawite sect, has repeatedly said he is using legitimate force to defeat what he says is a foreign plot to divide Syria.

State television aired an audio recording on Tuesday of what it said were two terrorists. It said the tape revealed "a full agenda of provocation and targeting police and army camps and terrorising peaceful citizens in the name of freedom and non-violence".

Foreign media were expelled from Syria after the uprising began in March, making verification of reports difficult.

In the northwestern province of Idlib on the border with Turkey, troops shot dead one villager, Hazem al-Shihadi at a checkpoint overnight near the town of Kfaruma where there has been increased army defections, activists said.

Demonstrations broke out across the country on Tuesday after prayers to mark the end of Ramadan, notably in Damascus suburbs, the city of Homs, 165 km (100 miles to the north) and the northwestern province of Idlib, activists and residents said, adding that security forces shot dead four demonstrators in the southern Deraa province, who included a 13-year-old boy.

"The people want the downfall of the president," protesters shouted in the Damascus suburb of Harasta, where activists said dozens of soldiers defected at the weekend after refusing to shoot at the crowds.

The Obama administration froze the U.S. assets of Foreign Minister Walid al-Moualem and two other Syrian officials on Tuesday in response to the crackdown.

Opposition figures in Syria see international pressure as crucial to stripping Assad of legitimacy and in helping raise the momentum of protests.