Syrian war 'a cancer' in Middle East says US senator 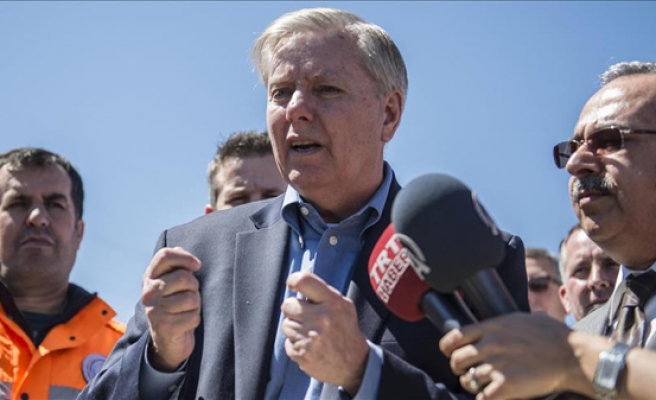 A U.S. senator visiting refugee camps in southern Turkey has labeled the Syrian war a “cancer” in the Middle East.

South Carolina Senator Lindsey Graham was speaking to reporters on Friday in Gaziantep when he described the conflict as "a cancer in the Middle East. It is putting pressure on the entire region”.

Syria has been locked in a vicious civil war since early 2011 when the regime of Bashar al-Assad cracked down on pro-democracy protests with unexpected ferocity.

According to a tally compiled by Anadolu Agency, more than 361,000 people have been killed in Syria since the conflict erupted five years ago.

Graham, a Republican, also claimed the U.S. did not have the right anti-ISIL strategy, saying it “will never work”.

“We are degrading ISIL but we do not have the right strategy to destroy ISIL,” he said.

The senator said he shared the Turkish government’s concerns over those “whom we are training in Syria to fight ISIL” adding that, in his opinion, these fighters could not destroy ISIL or hold territory.

“The longer it takes to destroy ISIL the more in risk all of us are,” Graham said.

Graham thanked the Turkish people “for their generosity in dealing with refugees”.

“I have been traveling the world and I have never seen a more impressive refugee camp than I have today,” he said.

“This is the gold standard for refugee treatment. Education, healthcare, job training… The Turkish people should be very proud and, on behalf of the United States, I thank you very much for what you are doing.

“The Turkish people are doing the world a service and the world needs to help Turkey,” Graham added.

Turkey is hosting the largest number of Syrian refugees in the world – 2.7 million – and has so far spent around $10 billion.

Graham also said there is need for “safe havens” in Syria so refugees “do not have to leave their country”.

Turkey has been pushing for a safe zone in Syria where refugees fleeing war could shelter, but this has not met with support from the U.S. thus far.