Thousands of Syrian women, children and the elderly are fleeing to Jordan through the north- eastern border braving a desolate desert. 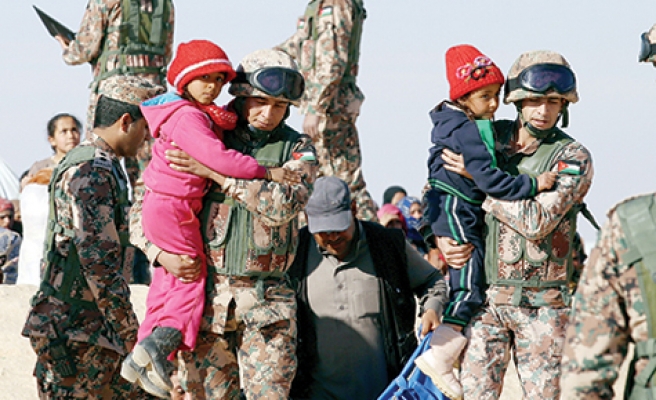 Abdelhadi Zarara, six children in tow, juggles with his emotions as he crosses into Jordan, as thousands of other Syrian refugees wait in no-man's land hoping their turn will come.

Zarara, 39, says "there was nothing left for me in Syria," where his wife was killed a few months ago in a regime bombardment that also destroyed the family home in southern Daraa province.

According to Jordanian authorities the number of Syrians stuck along its desert border with Syria jumped from a few hundred three months ago to 16,000 by the start of January.

They are fleeing the nearly five-year war, leaving behind death and devastation in the hope of making a new life in Jordan or beyond, with many eying Europe as their final destination.

But only 50 to 100 will be lucky enough to cross into Jordan each day, according to the army and aid agencies.

The kingdom says it is hosting 1.4 million Syrian refugees -- equal to 20 percent of Jordan's population and more than twice as many as the 600,000 figure given by the UN refugee agency UNHCR.

During the first two years of the Syrian conflict, there were 45 crossing points along the 378-kilometre (235-mile) frontier.

Now just two remain open, in rocky, hard to access areas devoid of water, shade or vegetation, according to UNHCR.

One of them is at Hadalat, 500 kilometres northeast of the capital Amman, while the other is at Rokbane, 70 kilometres further east.

Around 1,300 Syrians are stuck in Hadalat, while in Rokbane 15,000 are trapped in dire conditions, said General Saber Al-Mahayra, the head of Jordan's border guards unit.