Syrians tell of life under barrels and bombs 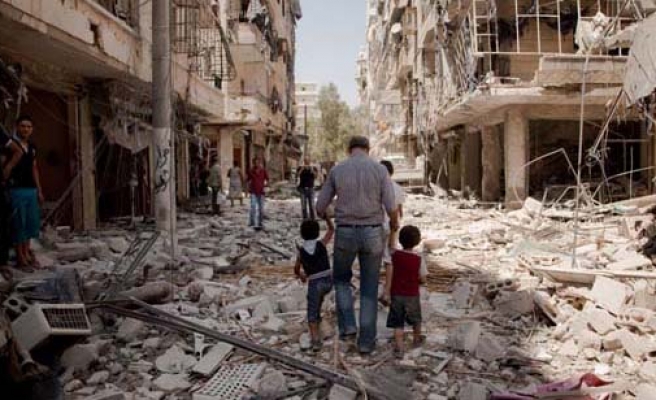 Syrian farmer Mahmud Turki was sitting on his couch at sunset watching the news with his family after eating supper. Then an air strike hit his home and turned his life upside down.

His story is typical of accounts of the "hell" that is life in the war-scarred region around the northern city of Aleppo, where up to 31,000 people have fled as government forces press an offensive against rebels, according to the UN.

"The moment of the air strike... nobody can describe it," Turki -- stitches still in his head and his body covered in bruises -- said from his hospital bed in neighbouring Turkey, where he was among just a few allowed across for treatment.

"I lost consciousness. The roof fell on me and on my children. I remember hearing the voice of my wife asking me if I was alive or dead," he told AFP.

Turki, 45, was admitted to hospital in the border town of Kilis on Friday after being pulled alive by his friends from the rubble of his home in Minnigh.

Fierce fighting in Aleppo province -- sparked by a week-long government assault backed by Russian air support -- have displaced tens of thousands of people.

Alaa Najjar also arrived in Turkey on Friday to be treated for a shoulder injury incurred during an aerial bombardment in Marea, also just north of Aleppo.

"I had a kitten. When the kitten heard the sound of the planes, she ran directly under the bed. If animals were intimidated that much, how can human beings endure it?"

Russia launched a bombing campaign in Syria last year at the request of President Bashar al-Assad, saying it was targeting the Islamic State group and other jihadist organisations.

Russian backing has helped Assad's forces make significant advances in recent months - including its latest offensive seeking to encircle rebel-held areas of Aleppo and sever their supply lines to Turkey.

Surrounded on all sides

Rebel fighter Mohammad crossed the border on Tuesday, walking with crutches and bandages around his right leg and a finger.

"The situation is very bad. People are fleeing. The town was completely destroyed by Russian air bombardment," the 30-year-old -- whose father was killed when six Russian air strikes hit his town -- told AFP.

"We are besieged by the Russians on one side, the YPG (Syrian Kurds) from the west and ISIL (Islamic State) from the east, and the (Syrian) regime from the other side."

Aleppo was once Syria's thriving economic powerhouse, home to several World Heritage sites including its famed ancient souk and citadel.

But it has been ravaged by war and divided since mid-2012 between government control in the west and rebel control in the east. Regime air strikes in the east, where they also use barrel bombs, have caused massive destruction, rendering parts of whole neighbourhoods virtually unlivable.

Fleeing Syrians have been massing for days around the Bab al-Salama border gate across from Turkey's Oncupinar border point, which remains closed.

Turkish officials say the border is kept open for "emergency situations," including the evacuation of the injured like Turki and Najjar.

Ambulances and aid trucks are seen coming back and forth throughout the day.

Turki was taken to Turkey in an ambulance before his family who arrived three days later.

Taking AFP to their room where his daughter Raghad was sleeping and four-year-old son Mussa was with his wife, Turki said his two children had skull fractures that required surgery.

The father asked little Mussa, with a bandage on his head: "Who attacked us?" Mussa answered: "Bashar's air strikes."

Turki lashed out at the international community for lack of action on Syria and denounced Russian President Vladimir Putin over Moscow's bombing campaign.

"There is no international community, no United Nations, no Geneva. NGOs are just a lie. The Security Council is also a lie," he said.

He poured scorn on Putin's claim only to be targeting ISILand other groups, pointing sarcastically to his children and saying: "They are ISIL members hit by Putin's air strikes."

"They are ISIL. The murderer Putin, the killer of children."