Syria’s state-run TV station has aired footage of the Syrian president performing Eid prayers in a mosque in Damascus. 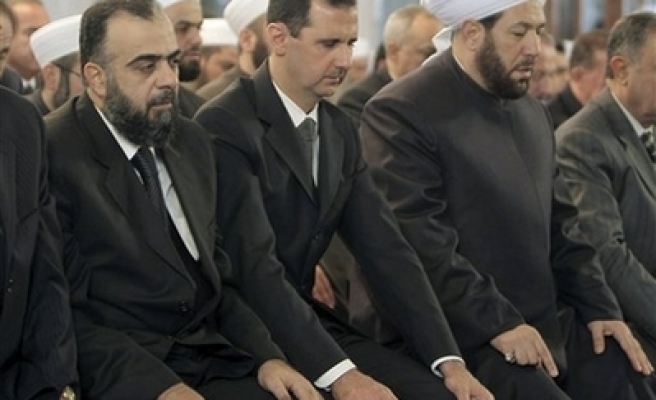 Syrian President Bashar al-Assad performed Eid prayers in a Damascus mosque on Sunday, state television showed, in his first appearance in public since a July bombing in the Syrian capital that killed four top security officials.

Assad, who is battling a 17-month-old uprising, was accompanied by his prime minister but not his vice president, Farouk al-Shara, whose reported defection was denied by the government the previous day.

In the state TV footage, Assad was sitting cross-legged during a sermon in which Syria was described as the victim of a conspiracy hatched by the United States, Israel, the West and Arab states but which would not "defeat our Islam, our ideology and our determination in Syria".

The July 18 bombing at the state security headquarters in Damascus was a stunning blow to Assad, who lost a brother-in-law in the attack, and fighting subsequently intensified with rebels making inroads into Damascus and the commercial hub Aleppo.

Syrian authorities on Saturday dismissed reports that Shara had defected as Assad's forces pursued an offensive against rebels, bombarding parts of Aleppo in the north and attacking an insurgent-held town in the oil-producing east.

Shara "never thought for a moment about leaving the country", said a statement from his office broadcast on state television in response to reports that the veteran Baath Party loyalist had tried to bolt to Jordan.

Assad, battling a spreading rebellion led by Syria's Sunni Muslim majority, has been abandoned by a number of senior officials, including prime minister Riyadh Hijab two weeks ago.

Shara, whose cousin - an intelligence officer - announced his own defection on Thursday, is a Sunni Muslim from Deraa province where the revolt began against Assad, a member of the minority Alawite sect that is an offshoot of Shi'ite Islam.

The 73-year-old ex-foreign minister kept a low profile as the revolt mushroomed but surfaced in public last month at a state funeral for three of the slain officials from Assad's inner circle.

The statement said he had worked since the start of the uprising to find a peaceful, political solution and welcomed the appointment of Algerian diplomat Lakhdar Brahimi as a new international mediator for Syria.

Brahimi, who hesitated for days before accepting a job that France's U.N. envoy Gerard Araud called an "impossible mission", will replace former U.N. Secretary-General Kofi Annan, who is leaving at the end of the month.

Annan's six-point plan to stop the violence and advance towards political negotiations was based on an April ceasefire agreement which never took hold. The conflict has deepened since then with both sides stepping up attacks.

Assad's forces have resorted increasingly to air power to hold back lightly armed insurgents in Damascus and Aleppo, Syria's largest city and business centre. More than 18,000 people have died in the bloodshed and about 170,000 have fled the country, according to the United Nations.

The Syrian Observatory for Human Rights said the army bombarded neighbourhoods in Aleppo. Rebels hold several districts in the country's largest city and have tried to push back an army counter-offensive.

State television said soldiers "cleared terrorists and mercenaries" - terms used by authorities to describe Assad's armed opponents - from the western district of Saif al-Dawla, where some of the heaviest fighting has taken place.

Internet footage which activists said was filmed in Saif al-Dawla on Saturday showed a plane making a low pass over buildings and dropping two bombs.

The Observatory also said at least 20 armoured vehicles moved into the eastern town of Mayadeen in Deir al-Zor province, where Syria's 200,000 barrels per day of oil are produced.

More than 130 people were killed in Syria on Saturday, it said, including 15 in Deir al-Zor.

In the town of Tel, north of Damascus, local activists said the bodies of 40 people killed by bombardment were gathered together for a joint burial. A picture showed what appeared to be several corpses wrapped in colourful blankets on a street.

Brahimi will have a new title, Joint Special Representative for Syria. Diplomats said this was to distance him from Annan, who complained that his peaceful transition plan was crippled by divisions between Western powers - who want Assad out - and Russia, his most important ally - in the U.N. Security Council.

Describing the situation in Syria as "absolutely terrible", Brahimi told Reuters he urgently needed to clarify what support the United Nations can give him and said it was too soon to say whether Assad should step down - in contrast to Annan who said it was clear the Syrian leader "must leave office".

The last U.N. observers who deployed in Syria four months ago to monitor Annan's failed ceasefire will leave after midnight on Sunday, when their mandate expires.

They will leave a "liaison office" open in Damascus after their departure, though its size and role have not been finalised, a U.N. spokeswoman said.