A day after Syrian authorities announced the army had pulled out, following a crackdown in which activists said scores of people were killed, the government appeared in full control. 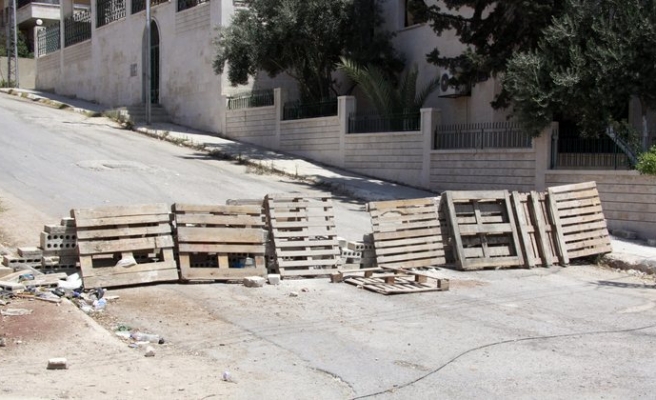 Main streets in Hama were empty on Thursday, windows shuttered and most shops closed after a week-long Syrian military assault to crush protests in the central city which became a symbol of defiance against President Bashar al-Assad.

A day after Syrian authorities announced the army had pulled out, following a crackdown in which activists said scores of people were killed, the government appeared in full control.

No tanks could be seen but armed, uniformed men stood on rooftops, soldiers manned a series of checkpoints into the city, and the governor's building in the central square was flanked by two military vehicles topped by machine guns.

A group of Turkish journalists, escorted around Hama by Syrian officials, were taken to a burnt out police building, two charred vehicles still standing outside it.

Other scars of Hama's week-long turmoil included a metre-wide hole blown into the back of the Hamidiyeh Mosque, and signs of heavy firing on the walls of buildings at the city entrance.

The visit, two days after Turkey's foreign minister travelled to Damascus to urge Assad to end the bloodshed, appeared aimed at showing the army had -- at least in one city -- returned to barracks, as well as reinforcing a government message that armed groups were behind most of the violence.

Journalists were taken to a bridge over the Orontes River in Hama where officials say the mutilated bodies of at least 13 members of the security forces were found.

Several residents, speaking through Syrian official translators, said the army moved in after the city was taken over by groups who had blocked roads and burnt state buildings.

"I want democracy, but what I saw in this city was wrong," said Nizar, a 52-year-old shopkeeper. "These people -- they block roads, they set the government buildings on fire and they put this city into this situation. This is cruelty."

But not all agreed. Outside the Hamidiyeh Mosque, a group of young boys started chanting slogans for Assad's overthrow.

One youth approached the group of journalists, his face masked and only his eyes visible, to deliver his message.

"For 50 years we have the same administration in this country," said the youth, who gave his name as Mohammad Nasri, according to Reuters news agency.

"You see us, we have no weapons, but they are attacking us with tanks and planes. And I tell President Assad that, even though it will be difficult, we will get you out of power," he said, before disappearing down Hama's streets strewn with litter and upturned rubbish containers.

"Soldiers fired in every direction. Many houses were assaulted in our neighborhood," Abdurrahman, an elementary school student, told the Anadolu Agency correspondent as he showed bullet holes in the walls of a third floor apartment where he lives with his parents and his uncle who was killed when he was shot in the head.

"Our shop is closed, we can't go to work. Soldiers are firing on us wherever they see us even at prayer times," Abdurrahman's parents say.