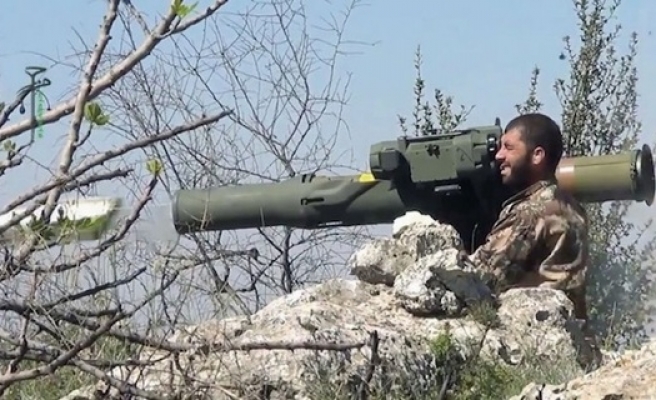 As President Barack Obama knits together an international coalition to take its campaign against ISIL from Iraq into Syria, fighters like Ammar al-Wawi could make the difference.

If he had the chance, he says.

He fears that restrictions on the kind of weapons he'll receive and the training he'll get under a $500 million White House proposal to arm Syrian rebels will make his job impossible.

"We don't really need more training. And we have enough soldiers. What we need are quality weapons," said Wawi, a commander in the Free Syrian Army, a loose collection of moderate rebels fighting both the ISIL and Syrian government forces.

"We need anti-aircraft weapons. We need anti-tank weapons. If we don't get those, we can't win, no matter what the United States does."

Under the current legislation in Congress, Wawi is unlikely to get what he wants, highlighting a dilemma for Obama after he authorized last week U.S. air strikes for the first time in Syria and more attacks in Iraq in a broad escalation of a campaign against the ISIL militants who have seized a third of both countries.

A significant part of Obama's plan hinges on congressional approval of $500 million to train and equip Free Syrian Army rebels to "strengthen the opposition as the best counterweight to the extremists," as Obama put it on Wednesday, and to prevent U.S. troops from "being dragged into another ground war".

But the administration has resisted providing powerful weapons requested by the rebels such as surface-to-air missiles due to fears they could be captured or used against America or its allies. Those concerns have been amplified since the downing of the Malaysia Airlines passenger jet over restive, rebel-held eastern Ukraine in July.

The $500 million plan, announced in June a month after Obama said he would work with Congress to ramp up support to the Syrian opposition, was initially limited to training about a 3,000-man force over an 18-month period and then slowly expanding those numbers.

It reflected the priorities of a president reluctant to get entrenched in another Middle East conflict. It was intended to build on a covert CIA-led effort that was based mostly out of Jordan and would be run by the Department of Defense. Each rebel would need to be vetted by U.S. officials to screen out hardliners, a time-consuming process that would further limit how many fighters could go through the training.

The goal, say officials and former officials briefed on the original proposal, was not to empower the rebels to prevail in their two-pronged battle against Syrian President Bashar al-Assad's forces on one side and ISIL militants on the other, but to enable them to hold ground they already have.

"From what we know, that was all just about keeping the war going, giving us just enough to keep the fighting going, but not enough to win," said Wawi.

In Washington, some say it's not just a matter of weapons. They contend that while rebels could provide crucial intelligence for any U.S. air assault, they are too undisciplined a force to be taken seriously, a rag-tag army of disconnected militias responsible for too many neighborhoods.

Some say it could be difficult, if not impossible, to build the fledgling FSA into credible ground force.

"I simply don't think there is much raw material there," said Richard Haass, a former senior State Department official involved in preparations for the U.S.-led invasion of Iraq in 2003.

"It is divided. It is weak. Any effort to build it up would take years, and I don't think we'd have much to show for it," said Haass, currently president of the Council on Foreign Relations.

The "train-and-equip" program, however, is supposed to change that.

A senior U.S. official traveling with Kerry said it was raised in talks with Gulf Arab foreign ministers at a meeting in the Saudi Arabian summer capital of Jeddah on Sept. 11, though it was not "the focus of the conversation".

"It's also been the subject of ongoing discussions between U.S. officials and their counterparts in various countries in the region over a period of weeks and even months," said the official, requesting anonymity. "We see this as a facet, as a component of the overall holistic anti-ISIL campaign," the official added.

Saudi Arabia has offered to host a U.S.-run training facility for the rebels, say U.S. officials. Lisa Monaco, Obama's White House counter terrorism adviser, clinched the agreement on a visit to the desert kingdom last week, a U.S. official told reporters in Washington, calling it a crucial component of the president's new strategy.

The facility is expected to be able to handle as many as 10,000 fighters, but details are still being worked out, including how long it would take to vet so many fighters and how much that would cost, say U.S. officials. More than 5,000 Syrian fighters are expected to be trained in Saudi Arabia in the first year, according the Pentagon.

A senior State Department official said on Sunday countries other than Saudi Arabia agreed to host training but declined to identify which ones.

Jordan has been considered a top choice due its close security relationship with Washington, proximity to neighboring Syria and pool of more than 600,000 Syrian refugees. But Jordan, like other Gulf Arab countries, has expressed fears of violent retaliation if its territory is used for overt training.

Wawi, an intelligence officer in the Syrian army before joining the rebels in August 2012, says he believes Syria's government tacitly supports ISIL fighters, or at least exploits them to undermine or fragment the opposition.

"When we fight Daash, the Syrian regime hits us with air strikes. They drop barrel bombs," he said, calling ISIL by an Arabic acronym.

Fred Hof, a former State Department official involved in formulating Syria policy before he joined the Atlantic Council think tank in 2012, said the presence of ISIL was "promoted almost deliberately by Assad as he has sought over the past three years to try to change the nature of the opposition to his regime."

Diplomats said Assad helped the rise of ISIL by releasing from his jails its most dangerous leaders. Those leaders set up links with other radical leaders in Iraq and waged a ferocious military campaign against other rebel groups.

Assad's strategy, they say, was to reinforce his narrative that his rule was facing an al-Qaeda style terrorism.

U.S. military officials have privately expressed reluctance to equipping the rebels with surface-to-air missiles, concerned such weapons could undercut the U.S. aerial advantage if they fall into the hands of ISIL. However, they said there is support within the Pentagon for supplying the rebels with weapons beyond small arms and ammunition, including battlefield artillery, anti-tank rockets and mortars.

It is unclear, however, if more American weapons and training can shift the battlefield balance toward the U.S.-backed rebels, who are badly outgunned by ISIL, other militant groups and Assad's forces.

Wawi is skeptical of American training. He went through it, he said, in Qatar for 15 days in July last year. "They only taught me how to use Russian weapons like Kalashnikov rifles," he said. "I didn't find it very useful."

That could change. David Schenker, a former Pentagon adviser on Syria during President George W. Bush's administration, said the United States may decide to offer anti-tank guns. Such weapons would require more sophisticated training. Hof and others, however, say it's unclear if such expanded training could be covered by $500 million.

"This $500 million, even it were appropriated tomorrow, or after tomorrow, it is not in the greater scheme of things a whole lot of money. And the appetite for the American taxpayer and the American Congress to get deeply into this in terms of monetary commitments, that appetite is under control," said Hof.

"This is where some of our partners who do have resources readily available - Saudis, Qataris, Kuwaitis, Emirates - this in part is where they come in."

Wawi, a balding 37 year old, looks a decade beyond his age. He joined the rebels after witnessing brutal government crackdowns over 2011 on anti-government protesters, including thousands in his home town of Jabal al Zawyeh.

A regular presence on YouTube and Arabic-language TV, Wawi was in Saudi Arabia seeking talks with Saudi leaders, he said. He describes himself as the secretary-general of the Free Syrian Army, though his exact position in the leadership is unclear.

Speaking to Reuters over dinner in Jeddah, he says the biggest threat facing the rebels are barrel bombs, which have been dropped by the army on densely populated neighborhoods in defiance of a U.N. Security Council resolution banning the indiscriminate and deadly explosives.

"The biggest enemy we have right now is the air force that is killing civilians, that is dropping the barrel bombs. We need to stop this. We need strategic weapons that can save us from these," he said.