They say that a king passed away

How much longer can the Saudi Arabia administration sustain its tight implementations in the social and political field is doubtful. 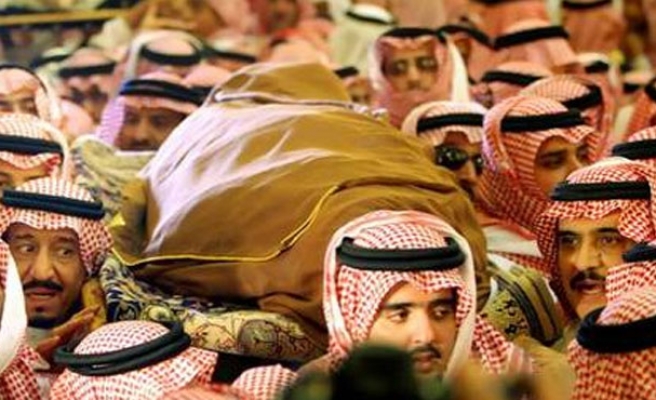 The deceased King of Saudi Arabia, Abdullah bin Abdülaziz was 90-years old. The King that replaced him, Abdülaziz, is younger than him: 80 years old. As for the Monarch of Qatar, who staged a coup against his own father and took the throne, he is of the age equal to their grandchildren’s. Also, the father of the Monarch of Qatar had also taken the throne by staging a coup against his own father. If you were to make a comparison in the sense of average age and the average duration of reigning the throne between the Petroleum Sheikdoms, you might discover interesting results.

The tradition of  the Saudi king’s older age  and preserving the hierarchy in the matter of age influences the balances within the tribe, political factors and, of course, the international relations.

When the Saudi king, who almost lived a century long, came to life, the Ottomans were recently collapsed, and the Saudi tribe had steered from the east of Arabia to the west, where they are more effectual; hence, they increased their dominance. At that time, the Saudi tribe just captured Mecca, and Medina was yet to fall. However, their rival Şerif Hüseyin, who was secretly waiting for the opportunity to riot against the Ottomans, embarked on an adventure, with the support of the Brits, in the hopes of a great state. The Brits were playing both sides, the Saudi tribe and the Şerif family, through different channels, and their plan was to use one of them against the Ottomans at the beginning, and then use the other one against both Ottomans and the rioting Şerif Hüseyin.

After the Brits encouraged the discontent, which was yet to reach a revolt phase, the dream of sitting on the throne of a great Arab state had turned into a riot that is formed of mostly Bedouin Arabs. It’s also certain that the possibility of the Ottoman’s defeat also encouraged this riot. However, the fact that this riot, which is depicted as a slave nation’s struggle for freedom against the Ottoman despotism in British history, didn’t even arise in any major Arab city, was always forgotten. In 1917, when the British soldiers under the lead of General Edmund Allenby captured Damascus,      they had arranged a ceremony especially for Şerif Hüseyin, in which he would enter the city like a victorious commander. As Şerif Hüseyin travelled to Damascus with the dream of the capital of his state, not only a great Arab state, but also the dream of the Caliphate was about to start.

The records of the sermons given at the Emeviye Mosque in Damascus like; “why the Caliphate requires to be given to Arabs”, “why the Ottoman Caliphate has no legitimacy due to steering away from justice and oppressing the public”; were constantly being reported to the British Ministry of Foreign Affairs. Those confidential documents are still in the British archives. Paradoxically, it was being reported to London that Ottoman agents were caught while collecting money in Southeast Asia, in Indonesia, in the name of aiding the Caliphate, until it will be removed from Turkey.

After these incidents, which happened a little while before the birth of the deceased king,  the Saudi-British politics would be shredding the Arabs and would be late to realize the worth of the lands, which had been ripped from the Ottomans, that would be left to Şerif Hüseyin. While pledging to Şerif Hüseyin, at the same time, they were promising Zionists a state in Palestine, and distribution negotiations, related with the soon to be invaded Ottoman-Arab geography, were being held between France and Britain.

In the end, Şerif Hüseyin would be given neither an Arab empire nor Caliphate. The invaded lands had been divided and given to their sons as a kingdom. As for Hedjaz, in other words, the holy cities of the Islamic universe, they would be handed to one of the most marginal movements. The capture of Mecca and Medina by Saudis caused a complete panic within the world of Islam, and, a worry that the tomb of His Holiness is in danger under the sovereignty of Wahhabi mentality, which burned shrines and opened war against any kind of religious symbol (like ISIL is doing nowadays), had been spread swiftly. Even though Saudi Arabia had promised not to touch Ravza-I Mutahhara, all the other tombs would be destroyed.

Even if it’s a theological conflict, in the end, a traditional structure became dominant. Until the petroleum agreement with the US after World War II…. One of the most crucial meetings of the Cold War balance was going to be carried out in Cairo and in exchange for the guarantee of the petroleum flow, the dominance of the Saudi family and country was going to be taken under guarantee. The story called “Arab Spring”; why it couldn’t get outside certain regions, why this spring returned to factory settings quickly, why Saudis unaccustomedly acted fast and paved the way for a coup that would be designating the domestic affairs of a great country like Egypt; is not independent from this story.

In this story, which stretches out from the poor Bedouin tents to the luxurious life styles provided by petro-dollars, the deceased king was coming from a generation which experienced this process no matter what. As for the king that replaced him, he also experienced the process of reaching stunning wealth from tents, and a position of country that holds the trump card of designating the world’s strategic developments from a tribal state. He comes from a generation, which personally experienced the process where the world’s petroleum balance’s codes had been constructed.

Until now, no opposing king, who would break this balance, came out. As for King Faysal, who attempted to use his initiative during the petroleum embargo in the 70s, he lost his life to an exemplary assassination. It’s a known story. It’s being told that, during the petroleum embargo period, Faysal hosted Kissinger, who came to the country to lecture Faysal, in a tent, and told him, “You can bomb the oil-wells. We don’t have much to lose. We came from this simple tent; we can live in it again. However, you have more to lose”.

There is no doubt that Faysal’s exemplary death had given a sufficient message to the Saudi family and other petroleum sheikdoms. They had done no act of spoilsport directed at developing an independent initiative that will compel the world petroleum balance in exchange for personal wealth. Besides, time also had shown them that it would not be possible for them to use the massive reserves in the Western Banks, in which they deposit all the revenue of oil sales, whenever they like.

When Saudi Arabia’s influence on the Arabic world, its power to designate the domestic politics of a leading country like Egypt, is taken into consideration in relation to Saudi Arabia’s surface area and economic capacity, then, Saudi Arabia’s position in the world system can be better understood.

How much longer can the Saudi Arabia administration sustain its tight implementations in the social and political field is doubtful. Leaving aside the participation of the public, it’s already difficult for old-generation kings to exceed the risk of leaving their spot to younger generations, as it is in small scaled emirates like Qatar, by themselves. The matters like; the increasing socioeconomic imbalance, the unsustainability of old consumption habits, how much longer the opposition within will keep quiet; are not independent from the agreements consented with the world system.

The question that cannot be hidden is this: Can this unfair income distribution in a geography that possesses the world’s largest underground richness be sustained? Who are the real owners of this wealth? The people of the region, or foreigners?