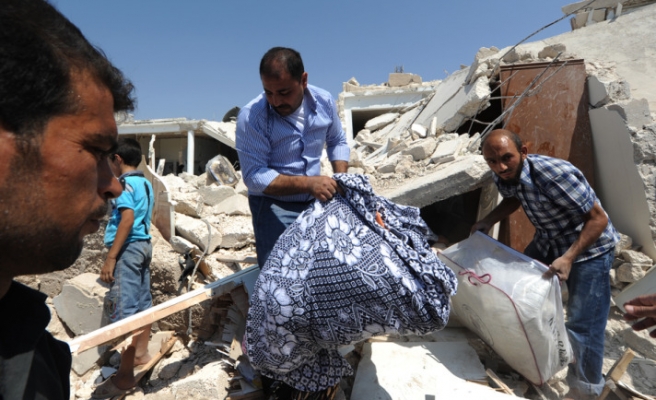 Syrians are pouring across the borders to escape fighting in their homeland and diarrhoeal disease has broken out in rural areas near Damascus, U.N. aid agencies said on Friday.

More than 170,000 Syrians have been registered in the neighbouring countries of Iraq, Jordan, Lebanon and Turkey, the U.N. refugee agency said.

"There has been a further sharp rise in the number of Syrians fleeing to Turkey," Edwards told a news briefing.

"There are now almost 65,000 Syrians in nine camps in Turkey, though not all yet formally registered. To put this in perspective, about 40 percent arrived in August."

Overnight, more than 1,000 Syrians arrived in Jordan, Edwards said. The UNHCR is working to improve the ratio of people to toilets - currently 40 to one - in Za'atri camp which holds nearly 8,000 of some 47,000 refugees registered in Jordan.

The humanitarian situation in Syria has deteriorated as fighting escalates, cutting off civilians from food supplies, health care and other assistance, aid agencies say.

"Fighting continues in and around other cities in addition to Aleppo, including Homs, Damascus, Deir al-Zor, Idlib and Deraa," said Marianne Gasser, head of the International Committee of the Red Cross (ICRC)'s delegation in Syria.

"Wherever possible, the Syrian Arab Red Crescent helps those trapped in the fighting by evacuating the sick and wounded and by providing emergency aid," she said in a statement.

In recent days, Red Crescent staff distributed aid to 25,000 displaced staying in 62 schools in Damascus, as well as food, mattresses and hygiene kits in cities including Aleppo and Homs.

Some 1.2 million people are uprooted within the country, many staying in schools or other public buildings, UNHCR quoted the U.N. regional humanitarian relief coordinator as saying.

U.N. humanitarian chief Valerie Amos, ending a visit to Syria, said on Thursday up to 2.5 million people needed aid in the country, where President Bashar al-Assad's forces have been fighting rebels seeking his overthrow for 17 months.

There has also been an outbreak of diarrhoea among residents in part of the province of Rural Damascus because the water supply has been contaminated by sewage, the World Health Organisation (WHO) said.

"In one pocket of Rural Damascus there are 103 suspected cases of e.coli. Laboratory testing is still going on," Richard Brennan, director of WHO's emergency risk management and humanitarian response department, told Reuters. "It is due to contamination of the water supply."

"We have heard of other pockets (of diarrhoeal disease) in other areas of Rural Damascus, but have no details," he said.

Sixty-one children under the age of 10 are among the 103 cases discovered by health workers, WHO spokeswoman Fadela Chaib said. Children are particularly vulnerable to diarrhoeal diseases, which require treatment including hydration and antibiotics.

"We know from Syrian authorities that an estimated 38 hospitals and 149 other clinics have been either substantially damaged or destroyed, which clearly worsens the access to health care," Brennan told a news briefing.

The ICRC said its experts were working on water systems in Aleppo, Damascus, Rural Damascus, Deir al-Zor and Homs.