The two were killed overnight when government forces fired live ammunition to disperse demonstrators who streamed out of mosques in the town of Qusair and in Latakia after al-Qadr prayers. 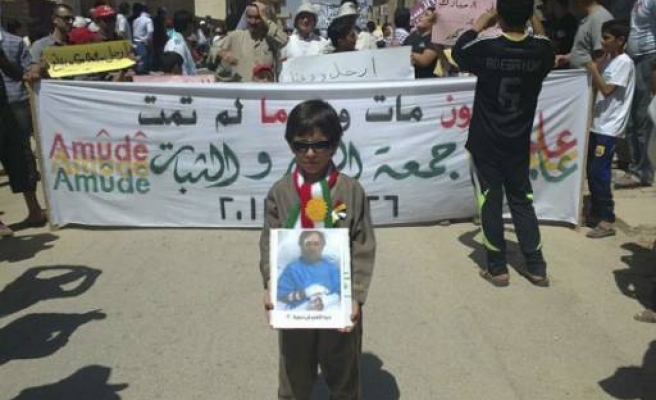 Syrian forces killed at least two protesters on Saturday as tens of thousands of people marched again to demand the removal of President Bashar al-Assad, activists and residents said.

The two were killed overnight when government forces fired live ammunition to disperse demonstrators who streamed out of mosques in the town of Qusair and in Latakia after al-Qadr prayers, the night when Muslims believe the Prophet received the Koran.

At the United Nations, a U.S. and European push to impose Security Council sanctions on Syria over its crackdown on the protests met resistance from Russia and China, diplomats said.

Assad has sent in tanks and troops to crush months of street demonstrations calling for an end to his family's 41-year rule.

Syrian authorities have blamed armed "terrorist groups" for the bloodshed and say 500 police and army have been killed. They have expelled most independent journalists, making it difficult to verify events on the ground. The United Nations says his troops have killed at least 2,200 protesters.

Coastal Latakia has been besieged by tanks and armoured vehicles for two weeks to end protests in the sixth month of the uprising.

"Death but not humiliation," a YouTube video showed marchers shouting in the northwestern city of Idlib.

They carried the old Syrian green and white flag of the republic before the Baath Party took power in a 1963 coup, ushering in almost five decades of minority Alawite rule.

"The people want the execution of the president," was another slogan chanted during a protest in the Damascus suburb of Hajar al-Aswad, home to refugees from the Israeli-occupied Golan Heights.

Similar demonstrations were reported in other Damascus suburbs, such as of Douma and Qadam, districts inside the capital, in Homs, hometown of Assad's wife Asma, the ancient desert city of Palmyra, Hama, scene of a 1982 massacre by the military and a tank assault this month, in the southern Hauran Plain and the eastern province of Hasakeh.

On Friday residents of Deir al-Zor said security forces opened fire to disperse scores of protesters, killing two of them on the spot, 26-year-old Marii Fathi and 22-year-old Oday Bahloul.

"There was shooting in Kanama Street near Jandol cafe and a white security van took their bodies," one witness said.

Another youth, Ibrahim Mohammad al-Dukhoul, was taken to hospital with serious gunshot wounds and died later, he said.

Six other protesters were killed across the country on Friday, including the southern town of Nawa, which has seen regular protests, where residents and activists said one protester was killed after security forces shot at demonstrators coming out of a mosque.

"Gaddafi is gone, it is your turn Bashar!" shouted protesters in the town of Hirak northeast of Deraa, encouraged by the overthrow of the Libyan strongman by rebels this week, according to a witness who spoke by phone.

In New York, the United States, Britain, France, Germany and Portugal circulated a draft resolution calling for sanctions against Assad, members of his family and associates. They said they wanted to put the draft to a vote as soon as possible but diplomats said there are no plans for that yet.

The measures are not as severe as U.S. sanctions in place and a proposed expansion of European Union steps against Damascus that would forbid the import of Syrian oil.

Russia's U.N. Ambassador Vitaly Churkin has hinted that Moscow would use its veto power to knock down the draft if it was put to a vote at the present time. Western diplomats said that Russia and China were refusing to discuss the draft.

Russia has a naval base in Syria and is one of its main arms suppliers. One proposed sanctions is an arms embargo.

The United States and EU have urged Assad to step down.

The uprising has damaged Syria's economy, hitting investment and tourist numbers. Businesses have been laying off workers.

European Union diplomats said on Wednesday the bloc's governments were likely to impose an embargo on imports of Syrian oil by the end of next week, although new sanctions may be less stringent than those imposed by Washington.

"France is more determined than ever to do everything it can that Bashar al-Assad ends the repression without delay and that blood stops flowing," French Foreign Ministry spokesman Bernard Valero said on Friday.

Since Ramadan began on Aug. 1, tanks have entered the cities of Hama, scene of a 1982 massacre by the military, Deir al-Zor and Latakia on the Mediterranean coast.

The first U.N. mission to be allowed into Syria since the crackdown began found that civilians felt under constant threat, a U.N. spokesman said on Friday.

"The mission concluded that although there's no countrywide humanitarian crisis, there is an urgent need to protect civilians from the excessive use of force," spokesman Farhan Haq said.