Thousands of families displaced from areas of northern and eastern Gaza returned to their districts, only to find their homes partially or completely destroyed. 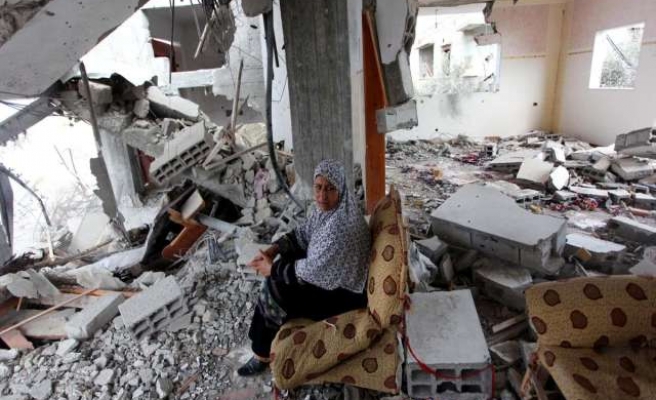 Gaza's city workers cleared roads of rubble and fixed power lines on Wednesday as a ceasefire took hold after 50 days of war, with displaced families expressing a sense of relief and frustration as they returned to their damaged homes.

Some of the biggest cheer was among Gaza's fishermen, who were able to sail six miles offshore to cast their nets rather than the usual three, even as Israeli patrol boats kept watch, allowing them to return with full catches.

Thousands of families displaced from areas of northern and eastern Gaza, the location of some of the most intense fighting of the conflict, returned to their districts, only to find their homes partially or completely destroyed.

"I am happy and I am not happy," said Salama Al-Attar, a father of three from the town of Beit Lahiya. "I am happy because the war has ended and I am unhappy because I have no shelter, no home."

Attar said he had fled with his family on July 15 as Israeli troops launched a ground offensive. His family has spent the past six weeks living in a temporary shelter set up inside a U.N.-run school.

Attar is just one of the estimated 540,000 people displaced by the fighting, a quarter of Gaza's 1.8 million population.

The latest and longest Israeli onslaught left 2,139 Palestinians dead, according to Gaza health officials, with most of those civilians, including 490 children.

As well as the human toll, an estimated 15,000 homes were badly damaged or destroyed in Gaza, while the electricity power plant and a water treatment centre were heavily bombed.

With quiet in the skies - aside from the occasional Israeli surveillance drone - families set up mourning tents to receive condolences for their lost relatives.

Hamas fighters, some of them still masked, visited relatives and injured colleagues in hospital, and joined celebrations in the street that went on late into the night on Tuesday. At least one person was killed in celebratory gunfire.

"Now we leave positions in the battlefield and we assume preparations and readiness for another fight," said one masked gunman, still clutching an assault rifle.

At the small port in central Gaza City, fishermen expressed relief at their catches, showing off mounds of silvery sardines glistening in the midday sun. With fishing an intensely competitive industry in the small enclave, they were already hoping for a further extension of their maritime limits.

"We hope they open up the sea further," said Raed Baker, a member of one of the largest fishing families in Gaza. "We hope this is going to be the last war on Gaza," he added, thinking about the wider sea access a longer-term peace might bring.

In Shejaia, a district of eastern Gaza battered by artillery fire during the war, families returning to wrecked houses set up tents to stay in and looked for ways to reconnect their fractured access to power and water.

"The house was destroyed and many of the family were killed," said Umm Mohammed Al-Helu, fighting back tears as she told of 10 family members killed by Israel's shelling.

If the ceasefire holds, the next objective is rapidly to get aid and reconstruction materials into Gaza via its border crossings with Egypt and Israel. U.N. officials have estimated the cost of rebuilding at up to $10 billion or more.

Pierre Krähenbühl, head of the U.N. Relief and Works Agency which supports more than 1 million people in Gaza, said the ceasefire was not enough by itself - it was essential to address the psychological and physical damage done.

"Scars of this war will take time to heal," he wrote on Twitter. "Physical and emotional wounds run deep. Children in particular will require attention and support."