The march showed that tension was still running dangerously high in Egypt more than a month after Mursi's removal. 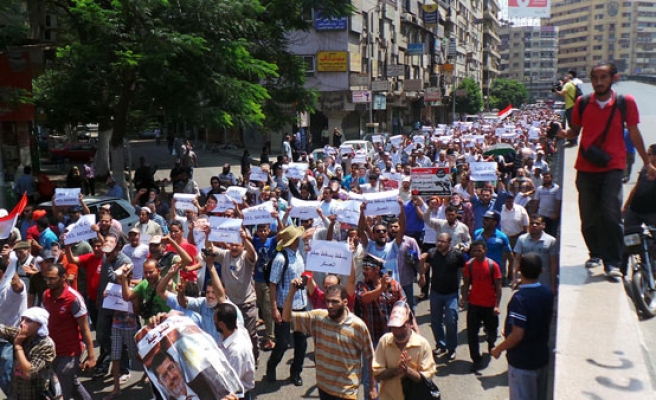 At least 2,000 supporters of deposed Egyptian President Mohamed Morsi marched through downtown Cairo on Monday calling for his reinstatement and denouncing thearmy general who led his overthrew.

The protest took place as international envoys spoke to leaders of both sides of the crisis in the search for a political solution and avert further bloodshed.

Marchers chanted "Morsi, Morsi" and "We are not terrorists", and waved pictures of the ousted leader.

Others sprayed graffiti on walls and statues insulting army chief General Abdel Fattah al-Sisi, who led the overthrow of Mursi on July 3 following mass protests against his presidency.

Security forces made no immediate attempt to disperse the protesters, who marched 10 abreast, stretching several blocks.

The march showed that tension was still running dangerously high in Egypt more than a month after Mursi's removal, despite the international efforts to mediate a peaceful settlement.

Morsi became Egypt's first freely-elected president in June 2012, 16 months after the overthrow of strongman Hosni Mubarak, who had ruled for nearly 30 years.

But fears that he was trying to establish a new Islamist autocracy coupled with a failure to ease economic hardships afflicting most of its 84 million people led to huge street demonstrations on June 30, triggering the army move.

In the early hours of Monday, the envoys visited a high-ranking member of Morsi's Muslim Brotherhood in jail, the crisis, the state news agency MENA reported.

Mena said they talked with deputy Brotherhood leader Khairat El-Shater at Tora prison, south of Cairo, but it gave no further details. The U.S. embassy declined to confirm or deny the meeting.

Shater is deputy leader of the group that propelled Morsi to office last year. Seen as the Brotherhood's political strategist, he was arrested after Mursi's downfall on charges of inciting violence.

The international mediation effort has so far helped to contain conflict between Morsi's backers and the security forces.

Thousands of Mursi supporters remain camped out in two Cairo sit-ins, which the government has declared a threat to national security and pledged to disperse.

The army-backed interim government said on Sunday it would give mediation a chance but warned that time was limited.

Shater told the envoys he would only hold talks with them in the presence of Mursi because he was "the legitimate president", the newspaper reported on its website, citing a senior security source.

The diplomats were accompanied by members of the armed forces during the visit, which the report said was focused on ways to end the sit-ins.

The authorities say the Brotherhood has incited violence, accusing it of engaging in terrorism - a charge the movement denies as it grapples with one of the toughest moments in its 85-year history.

The crisis has left Egypt, the Arab world's biggest nation, more dangerously divided than at any point since the downfall of U.S.-backed strongman Hosni Mubarak in 2011 and raised questions over the future of its nascent democracy.