Thousands of Jordanians turned out on the streets of the capital Amman on Friday to denounce the burning to death of a captured Jordanian pilot by ISIL militants. 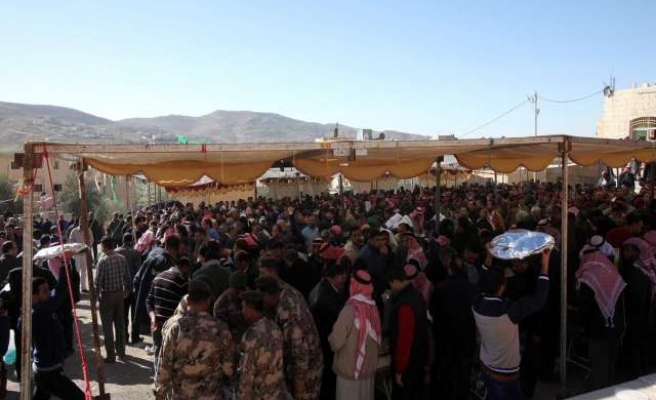 Thousands of Jordanians packed the streets of the capital Amman on Friday, urging their monarch to step up air strikes on ISIL to avenge its killing of pilot Mouath al-Kasaesbeh.

Crowds massed near the main Husseini mosque, then marched chanting "Death to Daesh," using an Arabic acronym for the group, in the latest sign of mounting public anger.

The rally came three days after ISIL released a video purporting to show Kasaesbeh being burned alive in a cage as masked militants in camouflage uniforms looked on.

Many Jordanians have opposed their country's involvement in U.S.-led air campaign against ISIL positions, fearing retaliation. But the killing of the recently-married pilot, from an influential Jordanian tribe, has increased support for the military push.

Queen Rania, the wife of King Abdullah, joined Friday's marchers, carrying a picture of the pilot.

"Mouath died standing for his country and faith, defending our common humanity. We are united in our grief and pride in our brave martyr," she told Reuters in a statement.

"Jordan is united in it's resolve to confront this ideology of terror and ultra-violence," she added.

Protesters wearing the red Arab Bedouin headdress, chanted: "We sacrifice our souls for you O'Majesty."

"All of Jordan's people are behind you Your Majesty," read a placard by a group of tribal Jordanians who came the country's northern Bedouin areas of Mafraq.

Hundreds of mosques in Jordan held prayers for the pilot. Clerics attacked the hardline group describing it as un-Islamic and said it's brutal means made many turn against it.

Jordanian Foreign Minister Nasser Judeh said his country's strike against ISIL in Syria was just the start of its response to the militant group's immolation of its captured pilot.

"It's actually the beginning of our retaliation," Judeh said in an interview with CNN on Thursday. He said his country was "upping the ante" and going after the militants "with everything that we have."