Ppposition tribesmen said they had downed a warplane outside the capital and captured its pilot. 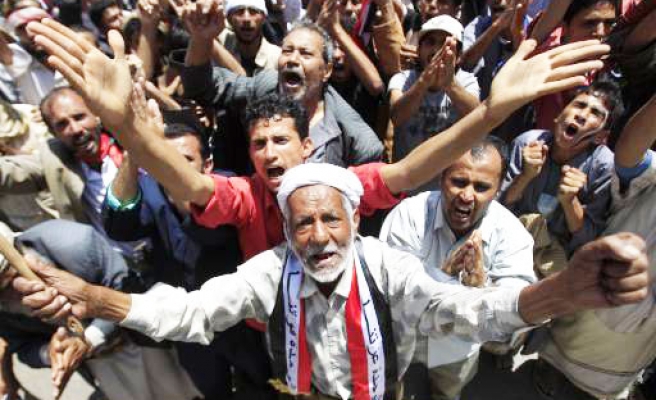 Tens of thousands of Yemenis protested in Sanaa on Wednesday against President Ali Abdullah Saleh's return from Saudi Arabia, while opposition tribesmen said they had downed a warplane outside the capital and captured its pilot.

"The point is, if we can't live a decent and dignified life, we'd rather die," said Khaled al-Mandi.

Yemeni protesters say they are fed up with grinding poverty, corruption and lawlessness in a country where two in three people have to survive on less than $2 per day.

Saleh's return has infuriated many Yemenis who thought they had seen the last of him when an attempt on his life in June forced him to fly to neighbouring Saudi Arabia for medical treatment, but he defied the odds on Friday by landing in Sanaa "carrying the dove of peace and the olive branch".

Before his return, protesters trying to expand their ramshackle camp in Sanaa were caught up in a battle between Saleh's forces and soldiers loyal to a dissident general. At least 100 people, mainly protesters, were killed.

While violence has dipped since Saleh came back, tensions are still high and many fear the lull will eventually give way to an even bloodier confrontation, if not all-out civil war.

Organisers were trying on Tuesday to build up the numbers of demonstrators by planning less risky routes through capital after the violence that had kept some off the streets.

Gulf nations seeking to broker a power transition have been exasperated by Saleh's repeated last-minute refusals to sign agreed deals. Saleh is now opposed by former allies such as Ali Mohsen, a powerful general, and the influential al-Ahmar family that heads his own Hashed tribal federation.

"We don't accept any political deals. After all the bloodshed, that option is gone," said Hazim, a 21-year-old protester. "We are struggling to survive, but the Yemeni people are like the ocean and you can't fight the ocean."

Salah Sharfi, a student, said he was ready to die for the sake of future generations. "We don't want to die, but if we must to make the country free, we will not hesitate." He had turned off his phone so his mother wouldn't know where he was.

Outside Sanaa, tribesmen shot down a warplane and captured its pilot in the mountainous region of Naham, where the airforce was bombing armed opposition tribesmen, a tribal source said.

A military official said the plane, a Russian-made Sukhoi fighter, had been downed while conducting a routine mission.

The tribal source said tribesmen had attacked the plane with anti-aircraft weapons and detained the pilot who had survived. Earlier this week an army general and three tribesmen were killed in fighting at a military base in Naham.