As gun fire can be heard around the Fath Mosque where around 1,000 protestors have been besieged as they sought refuge, it is indicated that troops have intervened. 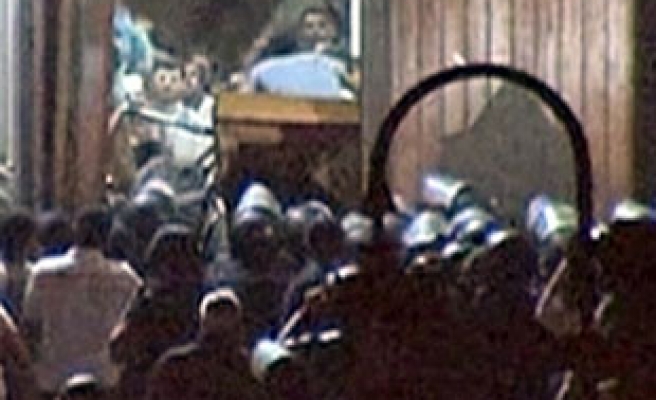 As gun fire can be heard around the Fath Mosque where around 1,000 protestors have been besieged, it is indicated that troops have intervened.

Egyptian security forces fired at Cairo's Fath Mosque, where hundreds of pro-democracy protesters are besieged in the building which also serves as a health center for the wounded.

Army troops opened fire toward the mosque minaret. Security forces claim they fired after unidentified gunmen opened fire on them.

After a small group of people agreed to be removed from the mosque under the supervision of a military unit, the soldiers began to intervene. Gas grenades were thrown into the mosque.

Hundreds of protesters, including women and children, had taken refuge in the mosque after clashes between security forces and demonstrators in Ramses Square escalated.

The protesters fear that they would be attacked by thugs and angry residents if they went out, and decided to stay inside the mosque.

10 women, 5 men and some journalists were among those who were removed from the mosque under the supervision of soldiers are negotiations between the anti-coup demonstrators trapped in the mosque and security forces.

As the hundreds of people stranded in the mosque awaited an opportunity to safely exit, pro-coup demonstrations continue to be held around the mosque where anti-coup protestors have been besieged. Those who exited the mosque are attacked by the Baltajis, or men wielding axes, despite being detained by security forces.

Helicopters fly over the Al-Fath Mosque on which fire has been opened. Those within the mosque have had their communication with the outside world cut off.

The minaret of the Fath Mosque has been riddled with holes resulting from the rounds fired by Egyptian troops.

An Anadolu Agency correspondent reported that 5 corpses and dozens of injured persons are within the mosque, noting that there had also been two previous corpses.

When police tried to force open the doors of the mosque in which around 1,000 protesters, including women and children, took refuge before the morning prayer, the protesters blocked all entries to the mosque with chairs and shoe cabinets to prevent security forces and thugs from storming it. Police conducted their attempts to convince the protestors from the other side of the barricade.

Due to their being no transportation available and curfew being in force, after the morning prayers, announcements were made from the mosque’s speakers, urging the people of the neighborhood to help the trapped protestors.

The National Alliance for the Defense of Legitimacy, a coalition of largely Islamist groups against military coup that ousted president Mohamed Morsi, has called on Egyptians to rush to the Fath Mosque in central Cairo to rescue protesters besieged inside.

A safety corridor was requested so that the stranded individuals could leave and the corpses could be moved.

Witnesses noted that security forces’ attempts to enter the mosque from the second floor proved unfruitful.

It is indicated that even when soldiers withdrew from around the besieged mosque, the Baltajis, or thugs wielding axes, and the police accompanying them continued to surround the mosque.

Meanwhile, Al-Jazeera television was able to connect with an AA correspondent. While a TV connection was secured, a plain-clothes person suspected of being a baltaji could be seen entering the mosque and asking if everyone inside was a Muslim Brotherhood supporters, before exiting then.

As police ordered that women leave the mosque, it was noted that they sought to place the men on the premises into custody.

An atmosphere of uneasy anticipation pervades the mosque. Meanwhile, the protestors face a lack of food and necessary supplies.

State television showed a small group of people leaving the mosque under the supervision of security forces. It is being speculated that those leaving were guaranteed a secure exit.

A group of men in plain-clothes outside the mosque is drawing attention as it is conveyed that the crowd consists of pro-coup baltajis providing support to the police.

One woman has reportedly died from tear gas inhalation.

More than 181 people were killed Friday in mass rallies staged by pro-Morsi demonstrators in several Egyptian cities to protest Wednesday's violent dispersal of their two main protest sites in Cairo and Giza.

Egypt has been in a state of turmoil since security forces violently dispersed the sit-ins in Rabaa al-Adawiya and Nahda squares.