The ruling party’s chief Ghannouchi said the party was open to dialogue, but removing Prime Minister Ali Larayedh or dissolving the Constituent Assembly were out of the question. 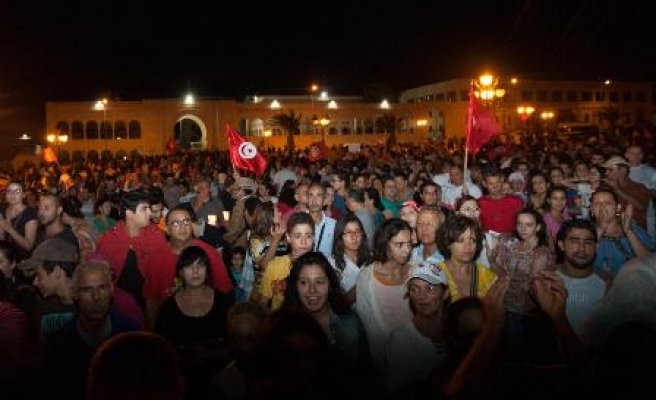 Tunisia's secular opposition will announce an alternative "salvation government" next week, a challenge the Islamist-led ruling coalition that could make it harder to negotiate a political compromise.

The head of the transitional parliament suspended the legislature's work last Tuesday until the government starts talks with the opposition which has been holding daily protests after the murder of two prominent secularist politicians.

Emboldened by the army's toppling of Egypt's Islamist president, Tunisia's opposition wants to bring down the government led by the moderate Islamist party Ennahda, and on Saturday said it would announce an alternative cabinet in the coming days.

"The consultations are continuing between the parties to the National Salvation Front, to choose a candidate for new prime minister and a salvation government," Mongi Rahoui, a leading member of the opposition grouping, said.

He said the candidate for prime minister would be announced early next week and cabinet members could be named by the end of the week.

The Salvation Front is a coalition of more than a dozen opposition parties that came together after the murder of prominent secularist politician Mohamed Brahmi on July 25, six months after another leftist figure was gunned down.

Opposition leaders have said they had no interest in reconciliation with Ennahda and have demanded it step down.

Ennahda's party chief Rachid Ghannouchi told Reuters in an interview that the party was open to dialogue but that removing Prime Minister Ali Larayedh or dissolving the Constituent Assembly were out of the question, and he challenged the opposition to a referendum to decide the matter.