Tunisian Prime Minister Ali Laarayedh on Thursday said, "some people benefit from the chaotic atmosphere in Tunisia and they seek to create same situation as in Egypt." 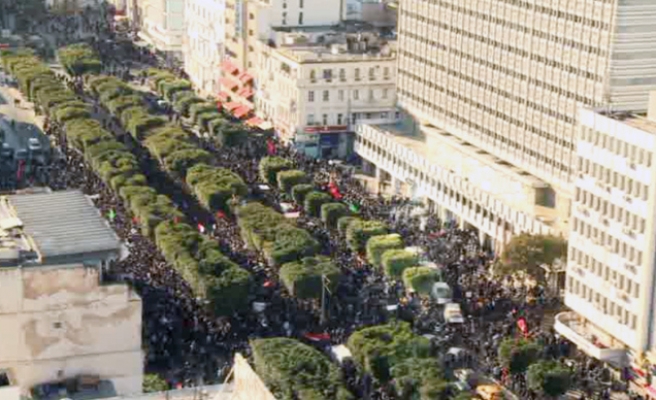 Tunisian Prime Minister Ali Laarayedh on Thursday said, "some people benefit from the chaotic atmosphere in Tunisia and they seek to create same situation as in Egypt."

"I condemn in the strongest terms this odious crime which targets the whole of Tunisia and its security," he told reporters, while urging calm.

"This drama must not be exploited to sow trouble," he said. "Only minutes after news of the murder was announced, calls were made inciting Tunisians to kill each other."

President Moncef Marzouki said the killing was aimed at derailing the Arab Spring, and called it a "second national catastrophe" after Belaid's murder.

Laarayedh told a press conference in the Tunisian capital Tunis, he was hopeful that the perpetrators of the politician Mohamed Brahmi's murder would be arrested soon.

"To maintain the social peace we have no other choice than dialogue and to build a consensus," Laarayedh pointed out.

One of the leaders of the Ennahda party, Fethi al-Eyadi, said that it's possible that foreign forces played a role in the assassination of Mohamed Brahmi.

Tunisian politician Mohamed Brahmi was shot dead outside his house on Thursday morning. He was a member of the Movement of the People Party, which is part of the same coalition that Chokri Belaid, another opposition politician killed in February, belonged to.