Turkish FM Davutoğlu said the Syrian Kurds' status within Syria should be determined after the establishment of a legitimate parliament in the war-torn country. 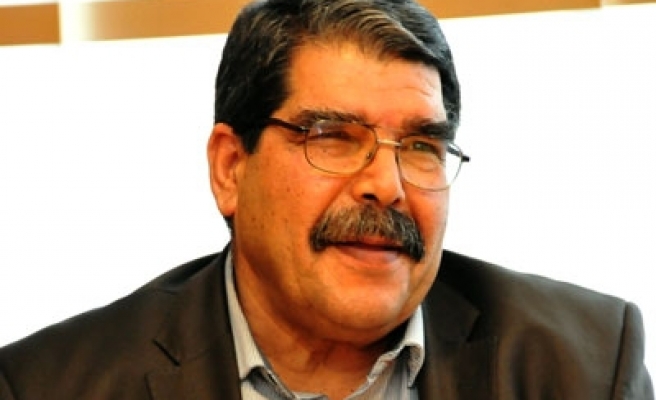 The surprise visit of the leader of Syria's Democratic Union Party (PYD), an offshoot of the Kurdistan Workers' Party (PKK), to Turkey amid Ankara's previous warnings to PYD about the establishment of an autonomous Kurdish region in northern Syria seems to be an initiative by Turkey taken to persuade the PYD to not take further steps that could escalate the conflict in Syria.

Ankara has been alarmed since the PYD recently declared its intention to create a political entity in northwestern Syria. Turkey believes that the creation of an autonomous region along the Turkish border may lead to wider conflicts in the war-torn country, as this might put the territorial integrity of Syria in jeopardy and present a security threat to Turkey.

While the armed fighting has escalated between the PYD and other groups over control of towns in northern Syria, Ankara has made its position clear, saying it will not take any part in the ongoing fighting between Kurdish groups and others for control of the northern towns bordering Turkey.

Prime Minister Recep Tayyip Erdoğan on Friday confirmed that Saleh Muslim is in Turkey, saying an official from the National Intelligence Organization (MİT) will warn him over any unilateral move to establish an autonomous Kurdish political structure in northern Syria. "An official will warn him over the dangerous steps they have taken," said Erdoğan.

Foreign Minister Ahmet Davutoğlu stated on Wednesday that Turkey had no enmity for any ethnic group in Syria, but opposes a bid by Syrian Kurds to create an autonomous region along the Turkish border.

"Any act of fait accompli would lead to far more bloodshed and quickly turn clashes between two parties into a conflict involving several parties. A de facto situation that would emerge as a result of acts of fait accompli would trigger responses from others. If everyone attempts to create their own regions, difficulties will ensue,” said Davutoğlu.

Muslim's visit comes amid Turkish officials' warnings against any unilateral move to establish an autonomous Kurdish region in Syria's north.

In a move to assuage Ankara's concerns, the PYD had earlier said that it poses no threat to Turkey's territorial integrity and called for broader cooperation with Ankara.
The commander of the Popular Protection Units (YPG) in Syria, the military branch of the PYD, Sipan Hemo, whose forces have recently gained some Syrian districts in the country's north amid ongoing clashes with radical groups, said Turkey has nothing to fear from YPG forces, describing other groups who might exploit the situation as the real threat to the region.

Speaking to Rudaw, an online newspaper in northern Iraq's city of Arbil, Hemo said, “Contrary to what has been said we, as the YPG, see ourselves as friends of the Turkish people.”

Hemo said Turkey should not see the flag raised by PYD forces in Ras al-Ain, a key town a few hundred meters from the Ceylanpinar district of Şanlıurfa province in Turkey as a problem.

Upon reports that Muslim is expected to meet with Davutoğlu, a senior Turkish diplomat, who spoke to Today's Zaman on the condition of anonymity, stated that there was no such meeting planned with Davutoğlu or any other minister.

Ankara fears Kurdish control of the border territory could lead to unrest among its own Kurdish population.

Turkey expects the Syrian Kurds not to cooperate with the Syrian regime and join the Syrian opposition fighting to topple the Assad regime and not to engage in activities that could constitute a threat to the security of the Turkish borders.