Turkey: Syrian border town about to fall to ISIL

Turkish President Recep Tayyip Erdogan said bombing was not enough to defeat ISIL and Turkey had made clear that additional measures would be needed. 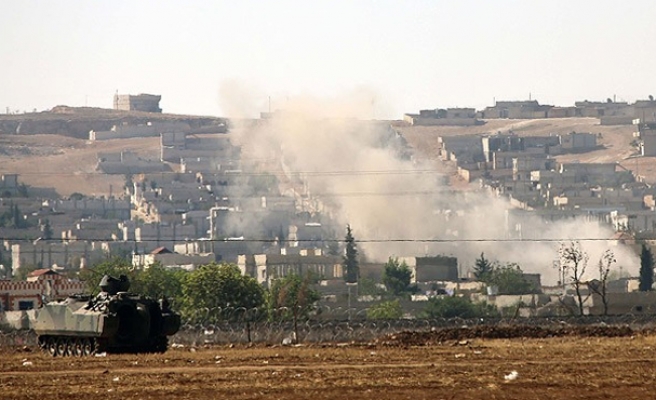 Turkey's President Recep Tayyip Erdogan said Kobani was "about to fall" after ISIL fighters advanced into the south west of the Syrian Kurdish town, pressing home a three-week assault has cost a reported 400 lives.

The prospect that the town on the Turkish border could be captured by the militants has increased pressure on Turkey, with the strongest army in the region, to join an international coalition to fight against ISIL.

ISIL wants to take Kobani in order to strengthen its grip on the border area and consolidate the territorial gains it has made in Iraq and Syria in recent months. U.S.-led air strikes have so far failed to prevent its advance on Kobani.

Turkish President Recep Tayyip Erdogan said bombing was not enough to defeat ISIL and Turkey had made clear that additional measures would be needed.

"The problem of ISIL...cannot be solved via air bombardment. Right now ... Kobani is about to fall," he said during a visit to a camp for Syrian refugees.

"We had warned the West. We wanted three things. No-fly zone, a secure zone parallel to that, and the training of moderate Syrian rebels," he said.

He said Turkey would intervene if there were threats to Turkish soldiers guarding a historic site in Syria that Ankara regards as its territory. But so far Turkey has made no move to get involved in the fighting across the border.

From across the Turkish border, two ISIL flags could be seen flying over the eastern side of Kobani. Two air strikes hit the area and sporadic gunfire could be heard.

The Syrian Observatory for Human Rights monitoring group said it had also documented 412 deaths of civilians and fighters during the three-week battle for Kobani.

On Tuesday, plumes of white smoke rose over eastern and central parts of Kobani and two ambulance crossed the border, travelling from Kobani to the Turkish side.

"Yesterday there was a violent clash. We have fought hard to keep them out of the town," she said by telephone. "The clashes are not in the whole of Kobani, but in specific areas, on the outskirts and towards the centre."

An estimated 180,000 people have fled into Turkey from the Kobani region following the ISIL advance. More than 2,000 Syrian Kurds including women and children were evacuated from the town after the latest fighting, a member of the Kurdish Democratic Union Party (PYD) said on Monday.

Before the offensive, Kobani, known as Ayn al-Arab in Arabic, was home to refugees from the civil war which pits rebels against President Bashar al-Assad and has deteriorated into hundreds of localised battles between different factions.

The most powerful of the myriad militias fighting against Assad, ISIL has boosted its forces with foreign fighters and defectors from other rebel groups. It gained additional heavy weaponry after its fighters swept through northern Iraq in June, seizing arms from the fleeing Iraqi army.

Turkey, a NATO member which shares a 900 kilometre (500 mile) border with Syria and has the most powerful military in the area, has so far refrained from joining the campaign, but the plight of Kobani has increased pressure to act.

Turkey says the scope of the campaign in Syria should be broadened to seek to remove Assad from power. It has sought a no-fly zone in northern Syria, which would require the coalition to take on Assad's air force as well as ISIL, a move Washington has not agreed to.

More than 20 Turkish tanks were parked on a hillside in circular formation around 1 km (half a mile) from the border.

Groups of mainly men travelled towards the border area to witness the clashes and protest against inaction by Turkey to protect Kobani. "Long live the YPG resistance" chanted a group of 20 men on a truck on the road to the town.

Turkish police fired tear gas and water cannon at dozens of demonstrating youths in a field near the border.