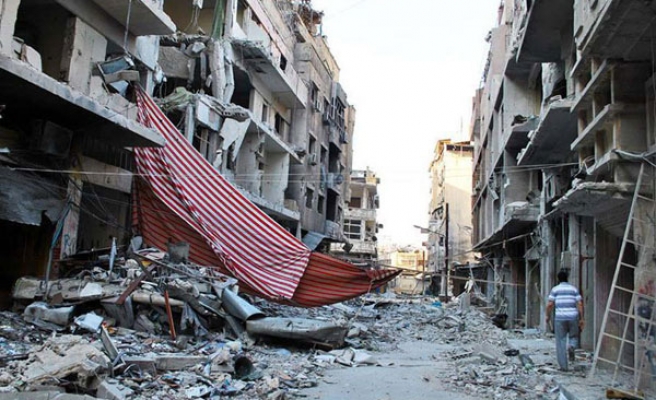 Turkish Foreign Minister Ahmet Davutoglu and his Bosnia-Herzegovinian counterpart Zlatko Lagumciya have critized the international community's stance on Syria in the article that they co-authored emphasizing the need to learn lessons from the Bosnia war.

In the article which appeared on the Washington Post website, the ministers ask "Is the world waiting for yet another apology by a U.N. secretary general for inaction in the face of a man-made humanitarian catastrophe — as happened in Bosnia and Herzegovina?"

Davutoglu and Lagumciya reminded that in Srebrenica, the world witnessed the murder of approximately 8,000 Bosnian men and boys and the forced deportation of nearly 30,000 women from their land.

Stating that Srebrenica became a byword for not only the brutality of the three-year conflict in the former Yugoslavia, but also of humanity at its most evil and depraved, the two ministers said "Yet 18 years after the atrocities of Srebrenica and the trauma of Bosnia and Herzegovina, the worst humanitarian calamity of the 21st century is unfolding in Syria. In another place and another time, we are again seeing a mass tragedy. That which the world had pledged would “never again” occur is playing out once more. After three years of war in Bosnia and Herzegovina, the death toll was more than 300,000 and the number of refugees reached 1.3 million. In Syria, more than 100,000 people have been killed since a peaceful uprising began in 2011. More than 7 million Syrians need humanitarian assistance; 4 million are internally displaced and 1.4 million are seeking refuge in neighboring countries."

Comparing the two cases, "In 1992, innocent people were killed on Vase Miskina Street in Sarajevo while waiting in line to get bread," said the ministers.

The articled continued, "In 2013, the innocent residents of Aleppo and Homs are the targets of savagery while they try to take bread to their homes. In Bosnia and Herzegovina, civilians were attacked with heavy weapons and artillery. In Syria, civilians have dodged ballistic missiles fired on civilian areas. And it has been confirmed that the Syrian regime has used chemical weapons against its own people. Ethnic cleansing was the sickening theme of the conflict in Bosnia and Herzegovina. In Syria, the regime ruthlessly, and apparently without shame, has massacred hundreds of civilians before the world," said the ministers.

"If the responsibility to protect does not apply to Syria, where does it apply?"

Praising the Syrian people's struggle, the ministers said in the article they were confident that the people of Syria would eventually free themselves from the shackles of the bloody regime.

"The will of the people always wins out. After decades of repression, they wish to live in a country where their will prevails, rather than that of autocrats; where the sovereignty belongs in its entirety to the people, who seek to enjoy universal values such as democracy, human rights, the rule of law and good governance that they have been denied. The valiant men and women of Syria will long be remembered for their gallantry and the noble struggle they are staging for this vision. In the 21st century, there can be no place for ruthless oppression with a medieval mentality, certainly not when the lessons of history are there to guide us."

Davutoglu and Lagumciya pointed out that the price of freedom should not still be as high two decades after the horrors of Bosnia and Herzegovina.

"When the next generations look back on Syria’s revolution, they will judge the actions of each individual. It is time for all Syrians and the international community to take their places on the right side of history," highlighted the article, asserting that history would keep repeating itself if no one learned from its lessons.