Turkish K9 trainer recalls a life on the frontline 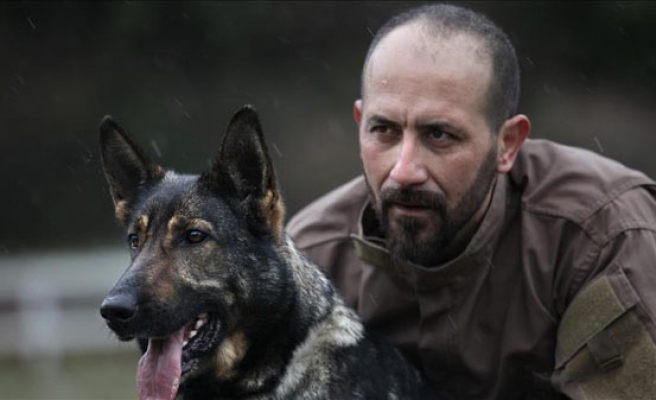 Goktan Eker is a man with a mission.

One of Turkey’s most experienced dog-handlers, the Istanbul-based expert says that the country needs to establish a national standard for canine trainers.

Given the Turkey’s recent experiences with mass-casualty bombings in public places, the need for the edge given by specially trained dogs (often referred to as K9 units) has never been greater.

Eker was speaking to Anadolu Agency recently about his training facility outside Istanbul where he is honing the skills of at least 15 dogs which will play a vital role in maintaining security in Turkey and abroad.

Eker – a 45-year-old former policeman – has spent 20 years forming a special bond with his animals, enjoying a career which has taken him and his dogs from Turkey’s capital to conflict-hit countries like Iraq, Afghanistan and Bosnia.

Surprisingly, however, he is one of just a handful of dog-training consultants in Turkey.

Energetic and persuasive, Eker's drive makes him sought-out as a dog handler.

After becoming a police officer in 1993 in Ankara, Eker worked on organized crime and riot control – it was here he first worked with K9 police dogs.

Eker was a policeman only for five years. Before resigning from the force, Eker was one of 10 officers who established Ankara’s Golbasi dog-handling center for the Turkish national police in 1996.

"I resigned because I wanted entirely to focus my career on K9 breeds," Eker says, indicating that his inquisitive and liberal characteristics were also key factors in his resignation.

Traveling to Germany, the Netherlands, the United Kingdom and Hungary to learn from overseas training methods, Eker finally admitted that the use of police dogs in Turkey was not as efficient when compared to some Western countries.

"Dogs, in many ways, are just like people but their olfaction and sense of hearing are far superior to human’s senses which means they make fewer mistakes than people.

“I thought that we should be using dogs more," Eker says.

According to Eker, his two-and-a-half years’ experience in war-torn Iraq is the milestone of his career.

"The turmoil and deployment of American soldiers in Iraq created a need for K9 breeds for security. With this opportunity, my Iraq adventure began," Eker says.

Arriving in 2005, Eker supplied bomb-detecting and guard dogs for the U.S. military: "I also worked at Mosul International Airport, which is now under the control of a terrorist organization [ISIL].

“Iraq was important for me because I gained most of my knowledge about dog training there," Eker says.

Eker says the deadly July 2005 London bombings also had a major role in his career development; he had arrived at Mosul International Airport with just two dogs one day before four bombers killed 52 people in a wave of attacks in the U.K. capital.

"On the same day, nearly 50 bomb dogs from Europe also arrived at the airport. However, due to the bombings, air traffic was stopped and the trainers could not reach Mosul," he says.

It meant Eker was put in charge of all the K9 units at the airport. According to him, Turkey was considered to be in the third league of the working-dogs sector until this incident.

As a result of his performance Eker and his dogs gained their European counterparts’ respect.

Eker established his own business – K9 Security Company – in 1998 in Istanbul. "I studied and traveled a lot to enhance the using of the police dogs in Turkey," he says.

With his 20 years of experience, Eker is now sought out by security forces and specialist security companies which want to take advantage of a recent change in Turkish law which now allows private firms to use K9 dogs.

According to Eker, the sector was also subject to many legal hurdles and Turkey only recently allowed private security firms to use dogs.

"But a new regulation, which was passed last September, has enabled private security organizations and companies to use K9 dog breeds to answer the high volume of special calls for security services," he says.

The new regulation aims to make the canines more effective. According to the regulation, K9 units are defined as guard dogs, explosives-detecting dogs or drug sniffer dogs.

Before the regulation, K9 dogs had been exclusively for police forces and other law-enforcement personnel.

"I worked in Afghanistan and America, giving courses on the training of sniffer and search-and-rescue dogs in a number of countries including Azerbaijan, Libya, Bosnia-Herzegovina, Kosovo, Russia and Croatia," he says.

Eker has 15 talented animals right now: "Two of my canines worked as bomb-detecting dogs for Turkish President Recep Tayyip Erdogan when he was prime minister," he adds.

"Dog training is a tremendously rewarding career and there is a huge demand for it both domestically and internationally.

"But, we do not have a national certification or education system for dog trainers," Eker says, complaining about a lack of standardization and national consensus.

Eker says that recent terror attacks and illegal immigration from Syria and Iraq have forced Turkish security departments use dogs and make use of their talents.

"We should pave the way for the use of security dogs in Turkey especially in this current terror spiral in the country.

“Turkish security forces are foreign-dependent. We, unfortunately, import the dogs and even the trainers as there is no sector for security dogs in our country," Eker adds.

The demand for training programs is huge but after September’s rule-change it is more than ever, Eker says:

"We have an ongoing certificate program in Istanbul's Bahcesehir University, which provides the education, practical skills and hands-on experience needed to become a dog trainer.”

For his dogs however the long road to success starts today at a freezing yard outside Turkey’s biggest city. For the best of them, a career making our cities, airports and lives safer awaits.