Three mortar shells struck Suruc, just kilometers from fighting between Kurdish forces and ISIL for the Syrian torn of Kobani. 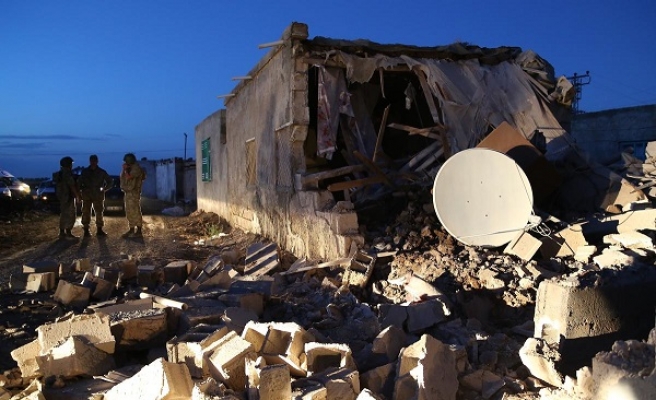 At least 15 tanks were positioned, some with their guns pointed towards Syrian territory, near a Turkish military base just northwest of Kobani. Plumes of smoke rose up as shells hit both the eastern and western sides of Kobani.

More tanks and armoured vehicles moved towards the Syrian border after at least two shells hit Turkish territory on Monday. The military said earlier it had fired back on Sunday after two mortar bombs crossed the border.

ISIL insurgents launched their assault on Kobani, a predominantly Kurdish town also known as Ayn al-Arab, more than a week ago, besieging it from three sides and sending more than 150,000 Kurds fleeing into Turkey.

"Because of the bombs everyone is running away, we've heard people have been killed. The YPG (Kurdish forces) have got small weapons but ISIL has big guns and tanks," said Xelil, a 39-year old engineer who fled Kobani on Monday.

"Most people are leaving now, it was safe before but now with these bombs, people won't stay," he said.

At least three people were injured after a mortar shell fell on a house in the southeastern Turkish town of Suruc on Sunday, according to Anadolu Agency reporters in the area.

A total of three mortar shells struck Suruc, which is just kilometers from the Syrian border. The two other shells landed in a vacant field.

The three people injured are currently being treated in Suruc State Hospital.

Recent ISIL attacks in Syria have increased the flow of the country’s refugees to Turkey.

Around 150,000 mainly Kurdish refugees have taken shelter in Turkey since the country opened its border on September 19.

Meanwhile, in Iraq around 30 ISIL militants were killed Sunday during separate operations against the organization in the country's north and east, local sources said.

Twenty militants were killed in the northern Iraqi city of Saladin, according to local police chief Major General Hamad an-Namis.

Another nine ISIL militants were killed and nine of their vehicles were destroyed since Saturday in Diyala, said Lieutenant General Abdulemir ez-Zadi, who is responsible for operations in the eastern Iraqi province.

“Operations will continue until the region is freed from ISIL,” claimed Zadi.

It has posted graphic online videos of mass executions, as well as the beheadings of Western hostages.