Two soldiers were killed in a blast near the Algerian border on Sunday. 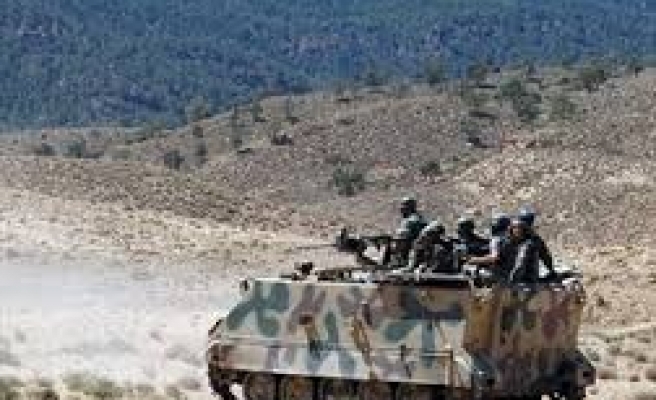 Tunisian police shot dead a gunman in Tunis and two soldiers were killed in a blast near the Algerian border on Sunday, as the government grappled with growing security and political crises.

There has been a surge in armed attacks over the past two weeks in the North African country, and on Friday security forces launched heavy air and artillery strikes on hideouts in the Mount Chaambi area near the Algerian border.

Tens of thousands of Tunisians came out in a show of force for the ruling Ennahda party on Saturday, shouting "No to coups, yes to elections."

On Sunday night, the opposition held a rival rally that drew more than 20,000, the largest protest since it began launching daily demonstrations last week.

Earlier on Sunday, two soldiers were killed and six others were wounded by a landmine that hit their tank as they searched an area in Mount Chaambi, where armed men killed eight soldiers last week in the deadliest attack on Tunisian forces in decades.

In the capital Tunis, Interior Ministry official Lotfi Hidouri said police raided a house where suspects were hiding weapons in the Kabaria district. "The police killed a terrorist and arrested five others," he said.

Over the past week, a roadside explosive device and a car bomb have targeted security forces in Tunis, the first such attacks to hit the capital. No one was hurt.

Once considered a model among fledgling "Arab Spring" democracies, Tunisia is facing its worst crisis since protesters toppled Ben Ali and sparked a wave of revolts across the region.

The opposition has accused Ennahda of being linked to or tolerating attacks. The party denies that and has stepped up recent efforts to crack down. It denounced recent attacks as terrorism.

In Tunis's Bardo square on Sunday, opposition protesters chanted slogans against Ennahda and participants said their rally was a more legitimate expression of popular will.