The mission's 300 unarmed observers, whose role has been to monitor a failed April 12 ceasefire in Syria brokered by Annan, suspended their activity on June 16 because of increased risk from rising violence. 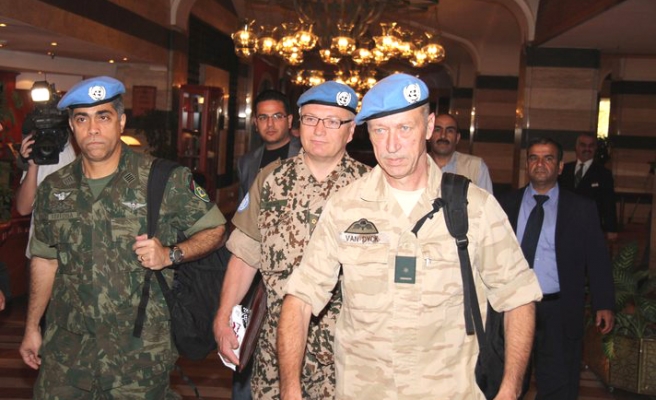 The U.N. Security Council voted unanimously on Friday to briefly extend a monitoring mission in Syria for 30 days, keeping alive a key part of international envoy Kofi Annan's faltering plan to end the 16-month conflict that has killed thousands of people.

Despite deep divisions over how to deal with the crisis in Syria, the Security Council backed Annan's peace plan and agreed in April to deploy 300 unarmed observers for an initial 90 days to help implement his six-point strategy to end the fighting.

But the 15-member council has been paralyzed when it comes to taking stronger action - including threatening sanctions - against Damascus. Russia and China have blocked three Western-backed attempts to pressure Syrian President Bashar al-Assad and end the conflict that began as peaceful pro-democracy protests.

U.S. ambassador to the United Nations, Susan Rice, said on Friday the council has hit a "substantive dead end" on Syria and that Washington was looking outside the world body for ways to tackle the crisis. She described Friday's resolution to extend the U.N. Syria mission, known as UNSMIS, as simply an exit plan.

With little progress made in the five months since Annan was appointed by the United Nations and the African Union to try to end the Syria crisis, the former U.N. secretary-general had asked the Security Council last week to back up his plan with "clear consequences" for non-compliance by both sides.

He voiced his disappointment with Security Council on Thursday, saying it had failed to take "strong and concerted action" on Syria after Russia and China vetoed a resolution that threatened Damascus with sanctions. A spokesman for Annan declined to comment on the mission's extension on Friday.

Russia and China support each other on the Security Council to protect their respective allies from interference. Russia is an ally and major arms supplier to Syria, which is also home to Moscow's only naval base outside the former Soviet Union.

"We hope that the double veto yesterday will not put the Annan plan in peril," Germany's U.N. ambassador, Peter Wittig, said after Friday's vote. "It is still the basis for all our efforts to find a diplomatic, political solution to the crisis."

"With the extension, the mission has another chance - maybe the last chance - to monitor the Annan plan, despite grave risks on the ground," he said.

Annan's plan calls for an end to violence, a Syrian-led political process, access for aid, the release of arbitrarily detained people, freedom of movement for journalists and the freedom to protest peacefully. The U.N. monitoring mission is crucial to helping implement the plan.

Friday's resolution says the council would consider a further extension to the mission after 30 days only if the United Nations "confirms the cessation of the use of heavy weapons and a reduction in the level of violence by all sides sufficient" to allow the U.N. mission in Syria to operate.

The mission's 300 unarmed observers, whose role has been to monitor a failed April 12 ceasefire in Syria brokered by Annan, suspended their activity on June 16 because of increased risk from rising violence. There are also some 100 civilian staff working on a political solution and monitoring rights problems.

Major General Robert Mood, head of the U.N. monitoring mission, left Damascus on Thursday. The mission's mandate had been due to expire at midnight ED T Fr iday ( 0400 GMT Saturday).

A Western diplomat said it is understood that Assad called Mood after a bomb attack in Damascus on Wednesday killed members of Assad's inner circle. Assad told Mood that he would implement the Annan plan if Mood could get the rebels to stop their attacks. Annan and Mood were not available to comment.

Assad's forces have killed more than 15,000 people since a crackdown on pro-democracy protesters began in March 2011, some Western leaders say. Damascus says rebels have killed several thousand of its security forces.

Syrian government forces fought to recapture border posts and parts of Damascus from rebels on Friday, seeking to take back the initiative following Wednesday's bombing.

Russia and China agreed to the resolution to extend the U.N. mission on Friday after it was broadened at the last minute to require both government forces and rebel fighters to take steps to halt the violence.

"I'm pleased ... its requirements are addressed to all sides in Syria," Russia's U.N. Ambassador Vitaly Churkin told reporters. He said the Western-backed resolution he vetoed on Thursday was "loaded with one-sided political requirements."

Britain's U.N. Ambassador Mark Lyall Grant described the new resolution as a last chance for the U.N. mission in Syria.

"If over the next 30 days there is a change in that dynamic and those conditions are met then of course the Security Council, on a recommendation by the secretary-general, will look again at the future of UNSMIS," Lyall Grant told reporters.

"But if the situation does not change then obviously UNSMIS will be withdrawn after 30 days," he said.

The United States has said it will turn to alternatives such as the "Friends of Syria" grouping of allied countries to find ways to pressure Assad after the Security Council's failure to set consequences for Syria's violations of Annan's plan.

But with key allies such as Britain pushing for the brief extension of the U.N. Syria mission, the United States withheld its veto on Friday to avoid being seen as torpedoing one of the last diplomatic initiatives under way to address the crisis.

China's U.N. Ambassador Li Baodong said on Friday that Beijing believed it was important for Annan to continue his mediation efforts and that he was "very happy to see that the council has come back to the right track."

"The future of Syria must be determined by the people in Syria and the Syrian issues must be resolved peacefully and through peaceful means, that's why Kofi Annan's mediation is very important and we should give him support," Li said.

U.N. Secretary-General Ban Ki-moon has recommended shifting the emphasis of the work of the UNSMIS from monitoring the nonexistent truce to pursuing a political solution. Diplomats said only half of the 300 unarmed observers would be needed for Ban's suggested shift in focus. The rest would return to their home countries, but be ready to redeploy at short notice.