An official told Reuters on Friday the team would cross into Syria on Sunday, assuming security conditions permitted. 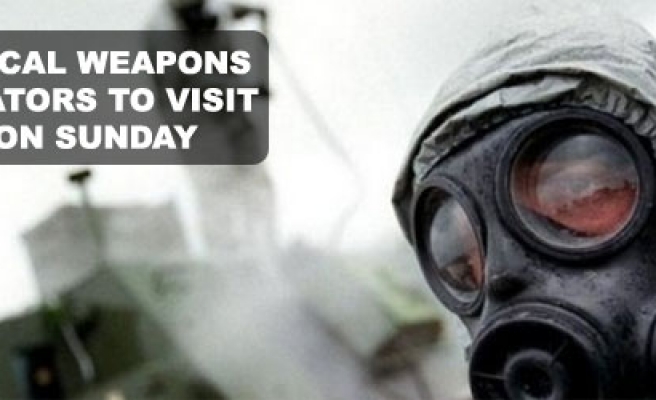 A U.N. mission to investigate alleged use of chemical weapons in Syria's civil war tentatively plans to enter the country on Sunday, officials said on Friday.

The team, consisting of weapons experts from the Organisation for the Prohibition of Chemical Weapons, plans to look into claims of use of sarin gas and other toxic nerve agents.

U.N. Secretary-General Ban Ki-moon said on Wednesday details of the trip had been worked out with theSyrian government and that the team's departure was imminent.

An official told Reuters on Friday the team would cross into Syria on Sunday, assuming security conditions permitted. A diplomat in the region confirmed the timetable.

One site to be visited by the U.N. experts is Khan al-Assal in Aleppo, where the Syrian government says rebels used chemical weapons in March.

Two other locations have not yet been identified and may be too dangerous for the team to visit, the official said.

The Syrian government and the opposition have accused each other of using chemical weapons during the two-year conflict, and both have denied it. The U.N. inquiry will try to establish only whether chemical weapons were used, not who used them.

The United States said in June it had concluded that Assad's forces used chemical weapons against rebel fighters.