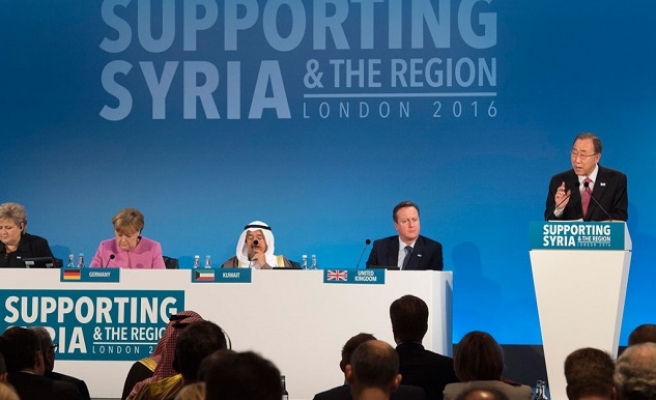 UN Secretary General Ban Ki-moon hailed Thursday a London conference for generating in excess of $10 billion in pledges to aid the Syrian people.

The single-day Syrian Donors Conference -- jointly hosted by Britain, Germany, Norway, Kuwait and the United Nations -- raised the funds in a matter of hours, with half of the funds being released this year.

"Never has the international community raised so much money on a single day for a single crisis," Ban said.

"The ‘Supporting Syria & the region’ conference has been a great success."

U.K. Prime Minister David Cameron said it had been a “day of hope”.

"We have combined a renewed effort to address the shortfall in humanitarian funding with a new approach to provide the education and jobs that will bolster stability in the region," he said.

Cameron said the conference had secured a commitment from the three countries bordering Syria -- Jordan, Lebanon and Turkey -- to open up their economies to allow refugees to work.

There was also a pledge to ensure 1 million Syrian children have access to education by the end of the next school year.

"This is not just morally right; it is vital for long-term stability. We cannot have a generation of refugees left out of school, unable to get work, vulnerable to extremism and radicalization," Cameron said.

The U.S.’s pledge of $600 million will go toward providing shelter, water, medical care, food, protection “and other necessities” for Syria refugees, the Obama administration said.

An additional $290 million is earmarked for educational development in Lebanon and Jordan.

Since the start of the conflict, the U.S. has provided over $5.1 billion in aid.

The apparent success of the London conference was in stark contrast to the floundering political talks to end the Syrian civil war.

A meeting in Geneva between Syrian regime and opposition representatives was suspended Wednesday night. Turkey’s prime minister, Ahmet Davutoglu, speaking from London, said the message that had emerged from Geneva was “not promising at all”.

"The talks have not continued due the situation on the ground. All of us have to know, if there is no good message from Geneva next time. We will be having many more donors conference in the future without any solution."