Ban announces the appointment of de Mistura, a dual citizen of Italy and Sweden, said diplomats 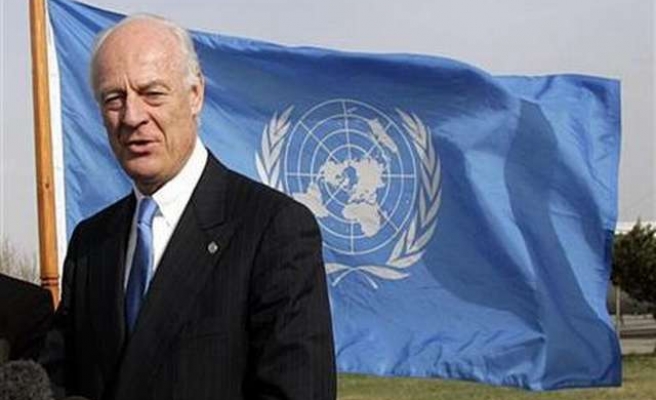 The move comes amid worsening violence as militants seized swathes of Syria and Iraq and after Syrian President Bashar al-Assad was re-elected in a June 3 poll described by Ban as a blow to international efforts to end to the conflict.

"In taking this decision I have consulted broadly, including with Syrian authorities," Ban told reporters, adding that he had appointed Arab League diplomat Ramzy Ezzeldin Ramzy, of Egypt, as de Mistura's deputy.

"The special envoy will provide good offices aimed at bringing an end to all violence and human rights violations and promoting a peaceful solution to the Syrian crisis," he said.

Diplomats, speaking on condition of anonymity, had confirmed the appointment on Wednesday.

Brahimi, an Algerian diplomat, stepped down on May 31, frustrated by global deadlock over how to end the three year civil war in Syria. He had long threatened to quit, just as his predecessor - former U.N. Secretary-General Kofi Annan - did in 2012.

Annan resigned after six months as the U.N. and Arab League joint special representative on Syria, accusing the U.N. Security Council of failing to unite behind efforts to end the fighting that has now killed more than 150,000 people.

"I call on the international community, including in particular the Security Council and the Syrian parties, to give Mr de Mistura unified support in order to allow him to succeed in his mission," Ban said.

De Mistura will not be a joint U.N. and Arab League envoy like Annan and Brahimi. De Mistura and Ramzy will be solely representatives of the United Nations.

De Mistura, a dual citizen of Italy and Sweden, has worked with the United Nations in Somalia, the Middle East, the Balkans, Nepal, Iraq and Afghanistan during the past 30 years. He was most recently the U.N. envoy in Afghanistan in 2010-11.

The United Nations says 10.8 million people in Syria need help, of which 4.7 million are in hard-to-reach areas, while three million others have fled the conflict.

U.S. Ambassador to the United Nations, Samantha Power, said Washington was ready to work with de Mistura, who had a proven record as "a tenacious and creative problem solver, and a tireless champion of peace, security and human dignity."

"Political transition by mutual agreement of the Syrian parties, supported by the international community, remains the only way to bring about sustainable peace in Syria. The new U.N. Special Representative has our strong support in these efforts," British Foreign Secretary William Hague said in a statement.