The council is scheduled to discuss the issue on Wednesday and is due to vote on July 18. 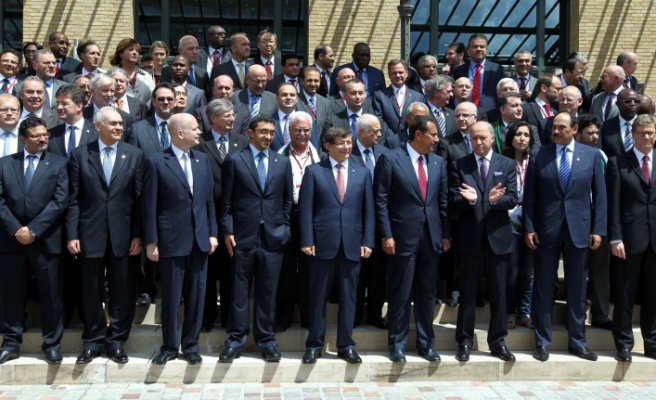 U.N. chief Ban Ki-moon recommended to the U.N. Security Council on Friday that its Syria monitoring mission shift focus from observing a non-existent ceasefire to securing a political solution to the conflict that has killed thousands.

The deeply divided council must make a decision on what to do with the U.N. mission in Syria, known as UNSMIS, before July 20 when its mandate expires.

The council is scheduled to discuss the issue on Wednesday and is due to vote on July 18.

The 15-member council approved in April the deployment of up to 300 unarmed military observers to Syria to oversee a ceasefire that has failed to take hold. The mission is part of a six-point peace plan proposed by international envoy Kofi Annan.

Ban's report to the council, obtained by Reuters, recommends the emphasis of UNSMIS' work shift from military observers - who suspended most of their monitoring activities on June 16 because of increased risk amid rising violence - to the roughly 100 civilian staff focusing on a political solution and issues like human rights.

The mission would keep its current mandate for up to 300 unarmed observers under this option, but significantly fewer likely would be needed to support the new focus.

"If UNSMIS were re-oriented in this manner, the Mission would redeploy from the field to the capital (Damascus) to minimize risks, retaining core civilian and military observer capacities to focus on the spectrum of initiatives feeding into the political process," Ban's report said.

"A reduced military observer component would support these civilian-led activities with military liaison and, as it does now, conduct visits to incident sites to conduct fact-finding and verification tasks," the report said.

While saying this approach would strengthen the conciliation approach and build support for Annan's peace plan, Ban warned the Security Council that it had drawbacks.

"Nonetheless, the risks associated with this approach may be more acceptable in comparison to the benefits of enhanced engagement and the uncertainty of alternatives," he said.

UNSMIS head General Robert Mood suggested on Thursday that he would support such a reconfiguration of the mission. He said the mission must stay, even though the ceasefire it was sent to police is non-existent and violence is reaching an "unprecedented level."

Withdrawal "a loss of confidence"

Ban presented other options that included withdrawing the mission altogether, expanding the number of military observers or adding an armed protection force, and leaving the mission as it is - although he said this last approach meant UNSMIS "would remain configured for tasks it cannot implement."

He said a complete withdrawal would "signal a loss of confidence in an early return to a sustainable cessation of violence and remove the sole source of independent monitoring of the six-point plan implementation on the ground."

"It would likely precipitate a further blow to efforts to stabilize the situation on the ground, and render the prospect of a negotiated Syrian-led transition, as laid out by the Action Group, more difficult," he added.

Russia and China, which have vetoed U.N. Security Council resolutions designed to pressure Assad, say they are committed to Annan's peace plan and have indicated they want the U.N. mission to remain in place as is.

But the United States, European council members and others have suggested that keeping hundreds of military observers in Syria to monitor a non-working ceasefire makes no sense.

U.S. Secretary of State Hillary Clinton repeated on Friday a call for a U.N. Security Council resolution under Chapter 7 of the U.N. Charter, which allows the Council to authorize actions ranging from diplomatic and economic sanctions to military intervention. U.S. officials have said they are talking about sanctions on Syria, not military intervention.

Annan's peace plan calls for an end to fighting by government security forces and rebels, withdrawal of heavy weapons from towns, return of the army to barracks, humanitarian access and dialogue between the government and opposition aimed at a "political transition" for the country.

"The six-point plan initially provided a mechanism to assist parties in de-escalating the conflict. Regrettably, it has not been implemented in any meaningful way," Ban said in his report.

"As of now, the Government of Syria and the armed opposition both appear to have chosen to pursue a military response to the current conflict, narrowing the space for comprehensive dialogue between the parties on what the future of their country should look like and how it can be achieved," he said.

World powers struck an agreement in Geneva on Saturday that a transitional government should be set up in Syria to end the conflict there, but they remained at odds over what part Assad might play in the process.