UN chief to send envoy to assess situation in Syria

Ban's remarks came after the U.N. Security Council approved a 30-day extension for an unarmed observer mission and Russia and China vetoed a resolution to impose further sanctions 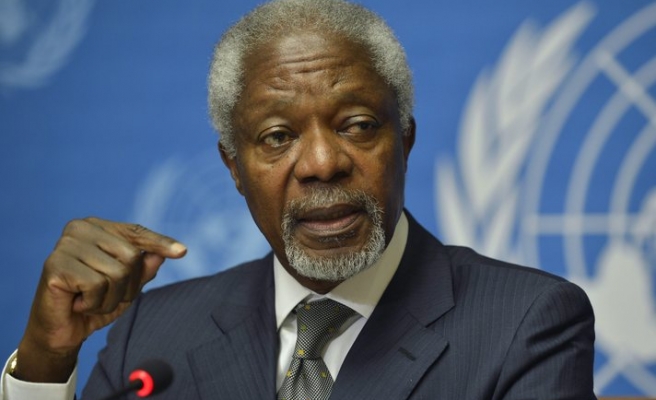 U.N. Secretary General Ban Ki-moon said on Saturday he was sending an envoy to Syria to assess the situation as government forces and rebels battle for control of the country.

"I am sending my Undersecretary General for Peacekeeping Operations (Hervé Ladsous) to Syria to assess the situation as well as the top U.N. military advisor (Gen. Babacar Gaye) to lead UNSMIS (mission) in this critical phase," Ban said after meeting Croatian officials in the Adriatic resort of Brijuni.

Ban's remarks came a day after the U.N. Security Council approved a 30-day extension for an unarmed observer mission and two days after Russia and China vetoed a resolution to impose further sanctions on the government of Syrian President Bashar al-Assad.

"The unanimous vote yesterday on Resolution 2051 is a constructive sign," Ban said.

Ban called on the U.N. Security Council to "redouble efforts to forge a united way forward and exercise its collective responsibility".

"The Syrian government has manifestly failed to protect civilians and the international community has collective responsibility to live up to the U.N. Charter and act on its principles," he said.

In Syria, government forces pounded rebels in Damascus overnight, battling to reverse opposition gains in the aftermath of the assassination of Assad's security chiefs.

Lightly-armed fighters have been moving through the streets on foot and attacking security installations and roadblocks.

But the heart of the city was quiet by 0400 GMT on Saturday, residents told Reuters.

"I am deeply distressed by the rising death toll and the growing number of people who have been forced to flee their homes within the country and across the borders," Ban said.

Ban said that the extension of the mandate of the UN observers was "a strong signal" that responsibility for ending the violence was "above all on the parties" in the conflict.

The UN chief said the Syrian government must stop the use of heavy weapons against the population and that all armed operations must end.

"The path towards peace is clear, there must be an end to killing and human rights violations and a rapid move towards the peaceful Syrian-led political transition and dialogue."