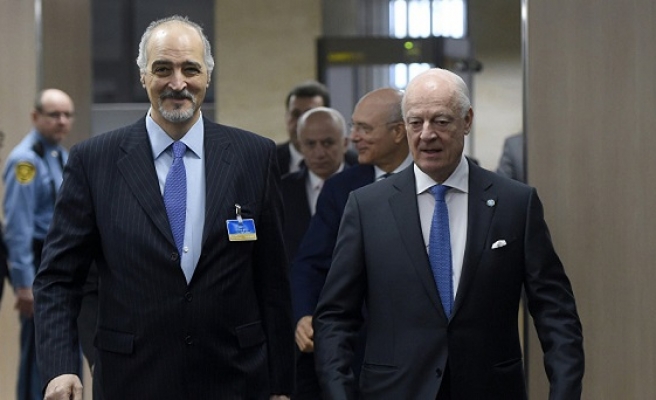 Peace talks to end the war in Syria entered their second week on Monday, with Damascus under UN pressure to meet a looming target date for making a concrete proposal on political transition.

United Nations mediator Staffan de Mistura says that before negotiations are paused on Thursday he wants the Syrian regime to set down on paper its vision for a new government for leading the country out of five years of brutal conflict.

Through the weekend, when no formal meetings were held in Geneva, the regime blasted de Mistura for taking sides, saying he had exceeded his mandate by pressuring the government and claiming the talks achieved nothing since resuming on March 14.

HNC member Yahya Kodmani on Sunday charged the government with being "obstinate" and "refusing any serious discussion" about the central question of political change.

The toughest issue facing the talks is the fate of President Bashar al-Assad. The HNC has insisted the president's departure be part of any peace deal, with the regime describing such demands as "a red line."

De Mistura has acknowledged that huge divides remain between the camps but claimed the talks had already produced positive outcomes by helping maintain a fragile ceasefire declared on February 27.

Assad-ally Russia on Monday accused the United States of stalling on the enforcement of the truce and not committing to mechanisms for responding to violations.

Washington supports the HNC and some opposition forces fighting on the ground in the conflict that has killed more than 270,000 people and displaced millions.

In a statement, Russian lieutenant general Sergei Rudskoy said that, given the US feet-dragging, Moscow was ready to unilaterally resort to force against ceasefire violators as of Tuesday.

The truce has broadly held since being declared last month and allowed life-saving aid to reach tens of thousands of Syrians stranded in besieged areas.

The ceasefire does not include the ISIL and Al-Qaeda linked Al-Nusra Front, who continue to be targeted in Russian air strikes and government offensives.

At least 26 pro-government fighters were killed battling the ISIL group near Palmyra on Monday as Damascus stepped up a bid to recapture the ancient city, the Syrian Observatory for Human Rights said.

Negotiations were rattled last week by Russia's surprise decision to withdraw most of its troops from Syria, a move that diplomats and experts said could help the peace drive by weakening Assad's position and forcing him to negotiate.

De Mistura has called the Russian pull-out a "positive" development and said that if the talks stall, he will turn to "those who have influence," to help clear the roadblocks, listing Moscow for its presumed ability to sway Assad.

The HNC's Kodmani on Sunday restated the opposition's belief that Moscow has the power to force the regime's hand.

"We hope that Russia will use its powers to pressure al Assad regime in order to move into serious negotiations on the political transition," he said.

Regardless of the regime's actions, Kodmani said the HNC was moving forward with negotiations by responding to 30 questions de Mistura had posed regarding the opposition's plan for political transition.

The UN envoy is scheduled to hold multiple meetings with both sides this week, beginning on Monday.