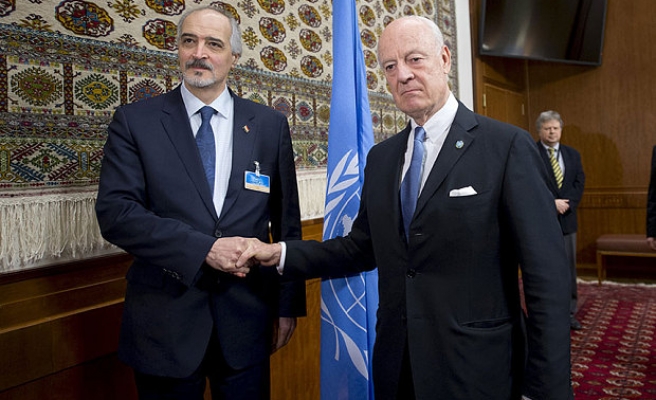 The UN envoy for Syria sought Tuesday to press President Bashar al-Assad's regime to ease the suffering of ordinary Syrians to enable fragile peace talks in Switzerland to "go deeper".

But the High Negotiations Committee (HNC), the main opposition umbrella group, remains sceptical, insisting that the regime to allow humanitarian access to besieged towns, stop the bombardment of civilians and release prisoners.

In an apparent gesture of goodwill, Syria's regime on Monday agreed "in principle" to allow aid into three besieged towns, the UN said. One of them is Madaya where 46 people have died of starvation since December.

While welcoming the "positive messages" from de Mistura, the HNC said Tuesday it was awaiting the outcome of his talks with Syrian regime envoy Bashar al-Jaafari.

"The regime will without doubt make some small signs," HNC spokesman Munzer Makhous said, saying the Madaya announcement was "designed to distract the international community's attention."

After his first official meeting with the HNC on Monday, De Mistura said it had a "very strong point" with its demands, saying the Syrian people "deserve to hear and see facts on the ground".

"When I meet the Syrian people they tell me: Don't just have a conference, have also something that we can see and touch while you are meeting in Geneva," he told reporters.

De Mistura was on Tuesday meeting with a 20-strong regime delegation ahead of afternoon talks with the HNC "to go deeper into the issues".

The Swedish-Italian diplomat said he expected the talks to be "complicated and difficult" but hoped they would "achieve something" by February 11 when key global players are to meet over the talks.